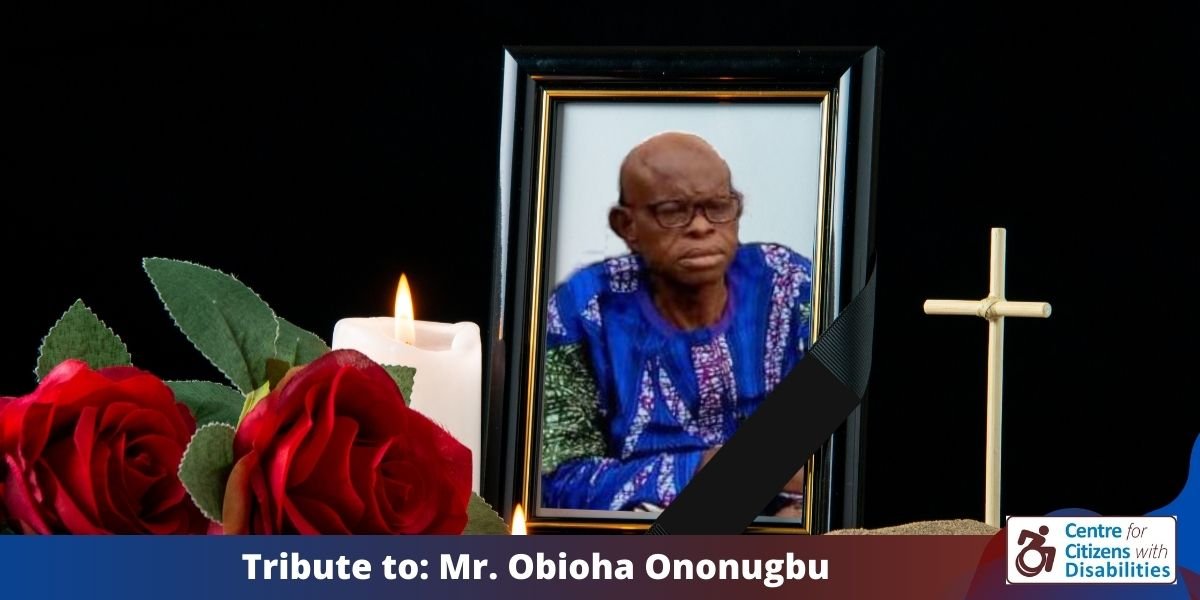 Mr. Obioha Ononogbu, the National Chairman of the Spinal Cord Injury Association of Nigeria (SCIAN), had passed away on December 1st, 2021. Mr. Ononogbu will be laid to rest this Friday, January 7, 2022, at Umu ndi Anyaogu, Umuachama Autonomous Community Amamba, Uzuakoli in Bende LGA of Abia State.

Until his death, Mr. Obioha Ononogbu, 62, was the National Chairman of the Spinal Cord Injury Association of Nigeria (SCIAN). The SCIAN Leader was a founding member of the Coalitions of Disability Organisations (CODO). He was also one of the leaders of the organisations of persons with disabilities (OPD) that resolved to establish the Coalition of Disability Organisations, where Mr. David Anyeale, a foremost disability leader in Nigeria, is the Director.

In an extraordinary tribute to the late Disability Leader, David Anyaele writes:
“It is very sad to write this tribute when the project on Enhancing Access to Airport for Persons with Disabilities, which Mr. Obioha Ononogbu, committed the Spinal Cord Injury Association of Nigeria (SCIAN) as a core partner is still ongoing.

Mr. Ononogbu lived his life to advocate and promote the rights and dignity of persons with disabilities in Nigeria. As the National Chairman of the Spinal Cord Injury Association of Nigeria (SCIAN) Cluster, he played a prominent role since the year 2000 in pursuit of legislation that would protect Nigerians with disabilities against discrimination and other harmful practices. The successful signing into law of the Lagos State Special Peoples Law 2010 by Mr. Babatunde Raji Fashola (SAN); and the signing of the Discrimination against Persons with Disabilities (Prohibition) Act 2018 by President Mohammadu Buhari were made possible through consistent support and effective participation of the SCIAN Leader in the lobbying and campaign for the disability laws in Nigeria.

As a dogged advocate and campaigner for the rehabilitation and reintegration of citizens with disabilities, Mr. Obioha used his position as the leader of the Spinal Cord Injured in Nigeria to support the physically challenged persons in Nigeria. This was made manifest through distribution of wheelchairs, rehabilitation materials, organising of empowerment programs and support for accommodation to members of his cluster.

Mr. Obioha as he is fondly called left us when we needed him most in the ongoing CODO project on access to airports in Nigeria which is being implemented in six States and Abuja FCT with support from the Disability Rights Fund. The goal of the project is that all airports in Nigeria are accessible to all irrespective of ability or disability. It was the pain and agony that Mr. Ononogbu and his cluster group members and all those that use wheelchairs constrained the Coalition of Disability Organisations in Nigeria to embark on this project. Mr. Ononogbu’s dream was to see our airports accessible to persons with disabilities.

As a man of peace, the SCIAN Leader was good to all. With his elderly dispositions, he guided most disability rights activists to be focused on the struggle for the emancipation of the disability community in Nigeria.
Mr. Ononogbu died on December 1st, 2021. He will be laid to rest on Friday, January 7, 2022, at Umu ndi Anyaogu, Umuachama Autonomous Community Amamba, Uzuakoli in Bende LGA, Abia State. The Coalition of Disability Organisations has resolved to keep the legacies of this great man by sustaining the struggle for an inclusive society, free from discrimination on the grounds of disability. It is our prayer that God will console his family, friends, and the disability community in Nigeria.”

Mr. David O. Anyaele, is the Convener, Coalition of Disability Organisations in Nigeria.