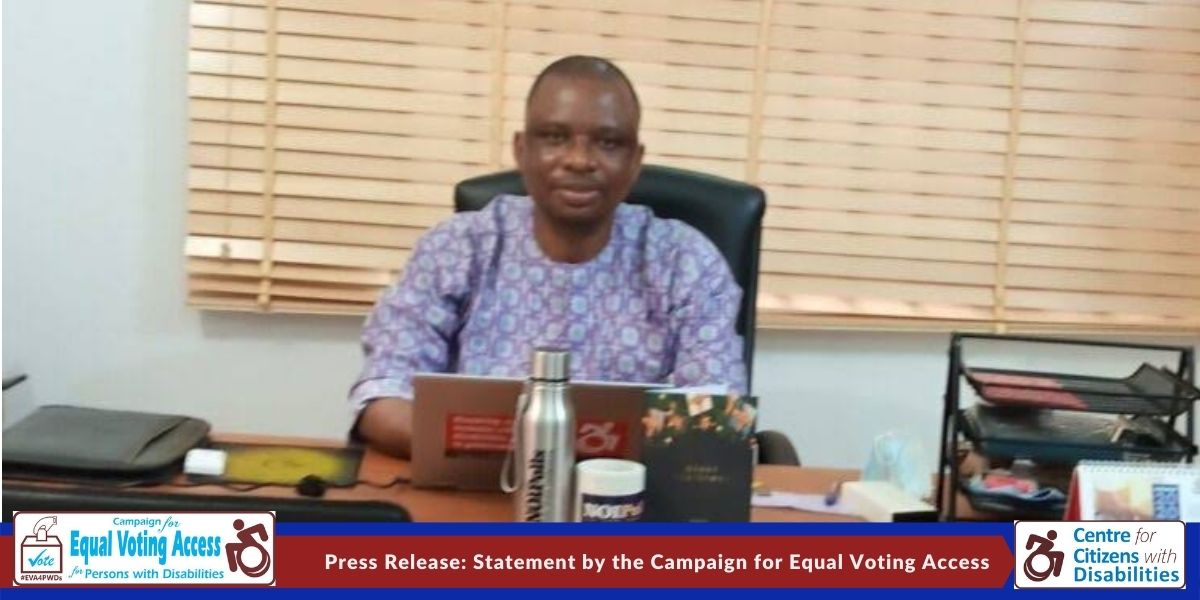 June 18, 2022 Written by CCD Nigeria. Posted in News No Comments

Preliminary Statement by the Campaign for Equal Voting Access on the June 18, 2022, Ekiti State Governorship Election

The Campaign for Equal Voting Access for Persons with Disabilities (EVAPWD), a program of the Centre for Citizens with Disabilities (CCD) participated actively in the observation of the June 18, 2022 Ekiti State Governorship Election organized by the Independent National Electoral Commission (INEC).

EVAPWD commends the Independent National Electoral Commission (INEC) for the conduct of today’s election, as we observed large turnout of voters as early as 8am at the Polling Units observed by #EVA Observers.

EVAPWD is impressed to observe that marginalized populations – the aged, nursing mothers and pregnant women and persons with disabilities were offered priority voting in most of the polling units observed. We commend Polling Officials for their efforts in this regard.

EVA4PWD observers observed that the promised Braille Ballot Paper by INEC for easy access for the Blind voters were scarcely available as it was only observed at PU 003, Ward 10, Afao/Kajola and PU 001, Ward 11, Odese in Ikere Local Government Area.

EVAPWD Observers did not see any magnifying glasses at the Polling Units observed. When Adhoc Staff were asked about this material, they told #EVA4PWD Observers that it is not available.

EVAPWD also observed that Information, Education and Communication (IEC) materials such as Election Day instructions and guidelines to assist the deaf or persons with hearing impairment understanding of voting process were not available in all the polling units visited.

EVAPWD observers report shows that large numbers of the polling units were not accessible to physically challenged persons. These polling units were sited in difficult places such as buildings without ramps/handrail, across gutter, staircase etc. The worse we observed was locating of a Polling Unit in a basement at PU 004, Ward 002, near Odo-Ado market, Ado-Ekiti LGA with no provisional elevators nor ramp to assist physically challenged voters.

With the above stated observations, the Campaign for Equal Voting Access for Persons with Disabilities, a program of the Centre for Citizens with Disabilities (CCD) is pleased that INEC granted PWDs priority voting during the 2022 Ekiti State Governorship Election.

Provision of assistive devices (Braille Ballots, Magnifying Glasses and location of Polling Units in accessible environments) were not observed nor sighted by our observers.

We urge INEC to address these issues as observed by EVA4PWD observers, especially as we move towards Osun State Governorship election next month.