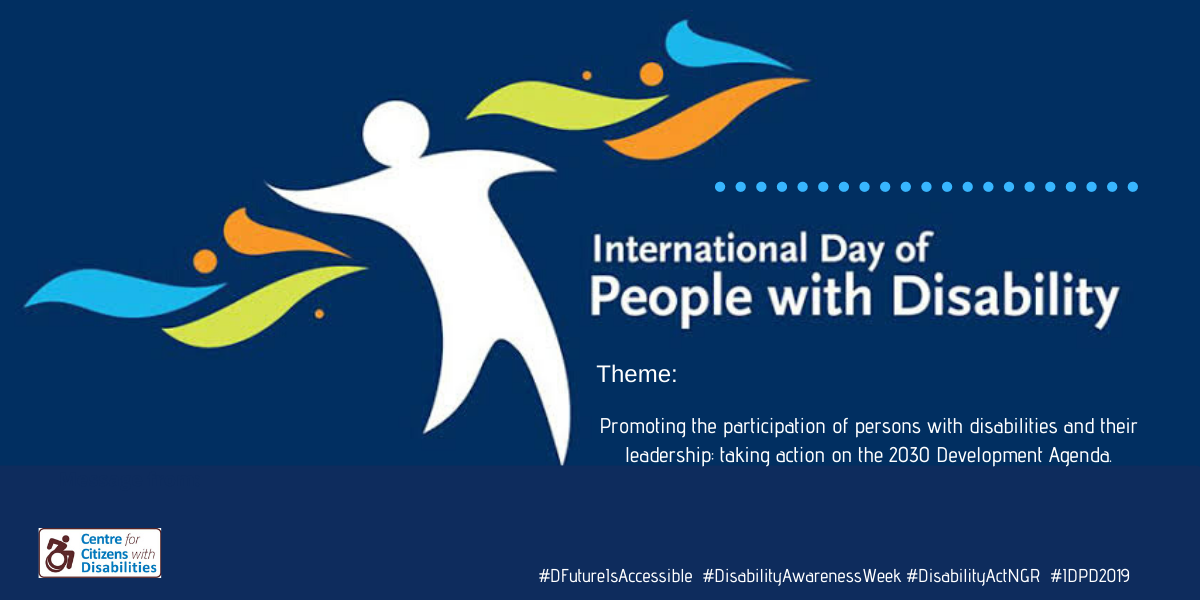 Since 1992, the United Nations International Day of Persons with Disabilities (IDPD) has been celebrated annually for persons with disabilities on 3rd December around the world. This year’s event is important to us at CCD as it’s the first time we are celebrating this day since the passage and assent by the President of the National Disability Act.

We wish to appreciate the media and specifically your organization for their continued support to the efforts of the disability community towards increasing the voice of the voiceless and the most vulnerable of the vulnerable group (Nigerians with disabilities) in our society through inclusive reportage.

We appreciate President Mohammed Buhari’s government for demonstrating political will through the assent on the Discrimination Against Persons with Disabilities (Prohibition) Act 2018.

We are concerned that only a few states in Nigeria (Kano, Jigawa, Anambra, Kogi, Ondo, Lagos, Ekiti, Plateau, Kwara and Bauchi States) have passed disability law, a legal framework that protects citizens with disabilities from exclusion and discrimination on the grounds of disabilities.

Acknowledging that Nigeria has signed the United Nations Convention on the Rights of Persons with Disabilities (CRPD) including its optional protocols, we state that SDGs will not be achieved if state and none state actors continue to discriminate, isolate and marginalize over 25 million Nigerians with disabilities in planning and implementation of the SDGs in Nigeria.

We call on President Mohammadu Buhari to establish without further delay the National Commission on Persons with Disabilities to ensure that the purpose of the Act is achieved. We never envisaged that 11 months after the passage of the Act, Federal Government would delay in the implementation of the provisions of the Act.

We appeal to the leadership of the National Assembly ably led by Sen. Ahmed Lawal to take adequate measure to ensure that line Ministries, Departments and Agencies provide in their budgets position for the implementation of the National Disability Act.

We urge anti-corruption agencies to take appropriate measure to involve and construct their anti-corruption fights using disability eye lens as persons with disabilities carries the greatest burden of corruption in our society.

We urge organisations of, and for persons with disabilities not to relent in their efforts of promoting and creating awareness on the disability issues at Local, State and Federal levels to enhance public understanding, as nothing about us with us.

CCD’s objectives include to initiate and implement programmes, policies, and activities geared toward the promotion and enhancement of the welfare of persons with disabilities; to empower or assist in empowering persons with disabilities and regularly access the impact of public policy on human rights and report on same through publications seminars, workshops and lectures; to educate, sensitise, counsel and mobilize persons with disabilities in various areas critical to their survival and progress and support and advocate for respect for the rule of law and due process.

CCD is recognized by the National Planning Commission, Federal Ministry of Women Affairs and Social Development, National Agency for the Control of AIDS (NACA) and Lagos State Ministry of Youth, Sport and Social Development as a credible NGO working on disability matters. We have over the past eight years sought a redefinition of society’s perception of the plight of persons with disabilities. CCD’s partners include: Department for International Development (DFID), Justice for All Programme- DFID, Open Society Initiative for West Africa (OSIWA), Ford Foundation, Population Council, National Democratic Institute (NDI), US Consulate, The Netherland Embassy, Chevron, Airtel among others.