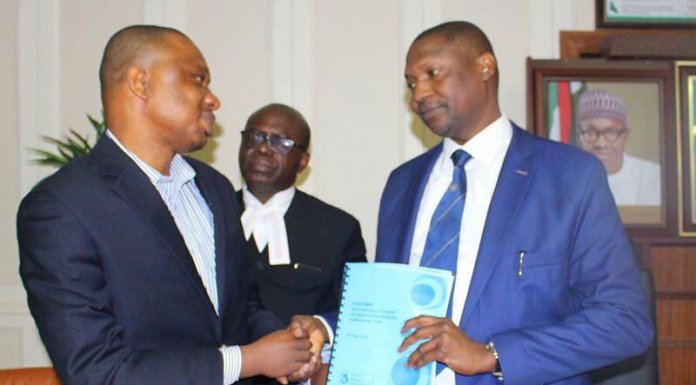 The Disabilities Bill was finally signed into law penultimate week, thereby putting a presidential seal on the 18-year struggle to empower 25million people living with disabilities, who were hitherto marginalised and denied access to several social amenities in Nigeria, Mary Nnah writes

Presidential Seal for the  Disability Act

Mary Nnah writes that finally the Disabilities Bill was signed into an Act, thereby putting a presidential seal on an 18- year struggle to empower 25million people living with disabilities, who were hitherto marginalised and denied access to several social amenities in Nigeria

Over the course of 18 years, several moves have been made under successive administrations in Nigeria to pass the Disabilities Bill. Such bills have often scaled through the processes at the National Assembly but have been unsuccessful, especially at the point of obtaining the presidential assent. But just recently, on January 24, 2019, to be precise, through the many efforts of the Centre for Citizens with Disabilities (CCD), President Muhammadu Buhari finally signed the Disability Bill into an Act.

Provisions of the Act

On that day, the Disability Community received with jubilation the news that Buhari had assented to the Disability Bill. This act now means that the era of discrimination against people with disability has come to an end in Nigeria.

With this singular action by Buhari, the reign of discrimination on the grounds of disability will no longer exist. Hence, the bill contains provisions that would ensure people living with disabilities in Nigeria are protected against discrimination and harmful treatment, cruelty and inhuman treatment, provision of facility at a public building, protection at a situation of risk and humanitarian emergencies, provision for an adequate standard of living and social protection.

With this Act, it is a crime against the state to discriminate against any person with a disability in Nigeria, which is key to rehabilitation and reintegration of persons living with disabilities.

Before the recent victory, the United Nations Convention on the Rights of Persons with Disabilities (‘the Convention’) was signed and ratified by the Nigerian Government almost eight years ago, but before January 24, 2019,  it was yet to be domesticated under the Nigerian statute books as required under the provision of Section 12 of the 1999 Constitution.

However, Nigeria, as one of the foremost Member States to sign and ratify the convention, had nonetheless lagged far behind in its domestication within her jurisdiction.

States including Bauchi, Lagos, Jigawa, Plateau, out of the 36 states of the Federation and FCT had passed Disability Laws to operate within their respective jurisdictions. For a long while, there was much pressure and persuasion on the Federal Government to show leadership by signing this proposed bill towards the full implementation of the provisions of the convention in the Federal Republic of Nigeria and for adoption by other states.

Consequently there were many struggles by those concerned, prominent among which was, the Centre for Citizens with Disabilities (CCD), recommending to the president to sign the bill at this point in time, believing that such will positively exhibit Nigeria’s commitment to the committee of nations to implement the provisions of this convention to properly mainstream People With Disabilities (PWDs) into the national development process.

So for over 18 years, it was a kind of war between the disability community and the federal government of Nigeria.

Worried that Nigeria’s population of persons living with disabilities has hit the mark of 25 million people and yet there was no comprehensive law or institution set up to specifically cater to their needs as required under the convention and that persons with disabilities in Nigeria face countless discrimination daily on account of their disabilities, particularly challenges in mobility, healthcare, education, physical and emotional abuse, and neglect, it was apparent that PWDs were in dire need of a law with an appropriate institutional framework to protect them.

Therefore, the Disability Community had to struggle continually for eight years to secure an act of the National Assembly that would criminalise all forms of discrimination and other harmful practices against citizens with disabilities in Nigeria. But then the purpose for the struggle was not forthcoming and so they had to endure for more than eight years.

So when on January 24, the PWDs eventually got the presidential nod for the Disability Bill to be signed into an Act, it was a dream come true!

Speaking during a press briefing on the presidential assent on the Discrimination against Persons with Disabilities (Prohibition) Act aka Nigeria Disability Rights Act, held at the Centre for Citizens with Disabilities (CCD) office, Ikeja, Lagos last week, CCD’s Executive Director, Mr. David O. Anyaele was overwhelmed with joy.

He expressed gratitude on behalf of the board of trustees, management and staff as well as volunteers of CCD, to all those who have been instrumental to bringing this dream to reality. He thanked President Buhari for signing Discrimination against Persons with Disabilities (Prohibition) Bill into an Act. He also thanked the leadership of the National Assembly led by Senator Bukola Saraki and Rt. Hon. Yakubu Dogara for fulfilling their promise of passing the bill before the end of this legislative session, noting, “By this singular act, the reign of discrimination and harmful practice against people with disabilities in Nigeria has come to an end.

“What that means is that no one, no matter how highly placed and no institution will discriminate against any Nigerian with disability or on the grounds of his/her disability.”

Anyaele, a Disability Activist and Social Worker; who when visiting Freetown-Sierra Leone in 1999, was attacked, captured and set on fire by the Revolutionary United Front (RUF) rebels of Sierra Leone, after his two limbs were forcefully chopped off because of his identity as a Nigerian. That experience has since left him without arms.

Speaking further, Anyaele said, “You may ask that beyond the criminalisation of the discrimination on the grounds of disability, what are other provisions of this act? These provisions include, that no public institution or public building would be constructed without creating access for people with disabilities.

“When we talk about access, it is not just lifts and ram, it also includes toilet facilities that would enhance anybody with a disability who is on wheelchair or clutches to access all facilities within such public building on equal basis with others”, he noted.

Anyaele who hinted further that the bill also provides five percent employment opportunity in all public institutions added that the bill will further provide right to education, right to health, right to political participation, as well as a commission that will monitor compliance and adherence to the provisions of this act.

Reminiscing on the challenges that his organisation had to go through to get the Disability Bill singed into an Act, Anyaele recalled that former Presidents Chief Olusegun Obasanjo and Dr. Goodluck Ebele Jonathan denied them assent on the bill.

“In fact, President Jonathan denied us assent two times – in 2011 and 2015, for  reasons best known to him and which was based purely on misguided information and ignorance on issues at stake as they have to do with people with disabilities in Nigeria”, he noted.

He recalled also that the Federal Republic of Nigeria Constitution 1999 had amended criminalised discrimination on different grounds, but was silent on the grounds of disability and this has led to institutional discrimination to the extent that if you go to public institutions and therefore people with disabilities were not included in government programmes, while public institutions were not accessible to people with disabilities  and so they struggle to get access to building in the public environments and worse still, they are not given employment opportunities.

He recalled that Nigeria signed to the UN Convention on the Rights of Persons with Disabilities, including its optional protocols in 2007 and 2010 respectively, which provide that all States parties to the convention shall take appropriate measure to make laws and policy to ensure full compliance to the provisions of the convention.

“We felt it was important to brief Nigerians on this latest development and to share our joy and excitement that a last all the struggling that we have been engaged in in the last 18 years, to the extent that we had a protest march in Abuja. Even before the protest march, at a time between December 2016 and December 2017, the disability bill got missing, and we had to raise an alarm. It was later discovered by March 2018, when we were told by the Senate president, Bukola Saraki, that the bill suffered administrative mishap and that he was going to penalise all those who were involved in strangulating the bill and graciously  the National Assembly took action.

“And when we discovered that the disability bill was not going to be priority to National Assembly, we led a protest march to the National Assembly on October 8, 2018, giving them an ultimatum of seven days to finish completion of action on the bill.  The following week, the leader of the senate raised the issue at the floor of the National Assembly asking the assembly to complete necessary action on bill to ensure transmission. And today, the reign of discrimination of the grounds of disability has come to an end”, Anyaele said with elation.

He therefore called on the government to ensure the full implementation of this law without delay, while also calling on the National Assembly to take appropriate action to ensure that the Act is gazetted and to ensure that its enforcement commences immediately.

“We also call on all line ministries, departments and agencies to take note   of this act and begin to take appropriate measures to ensure that no one is left behind on the grounds of disability in Nigeria”, he appealed further.