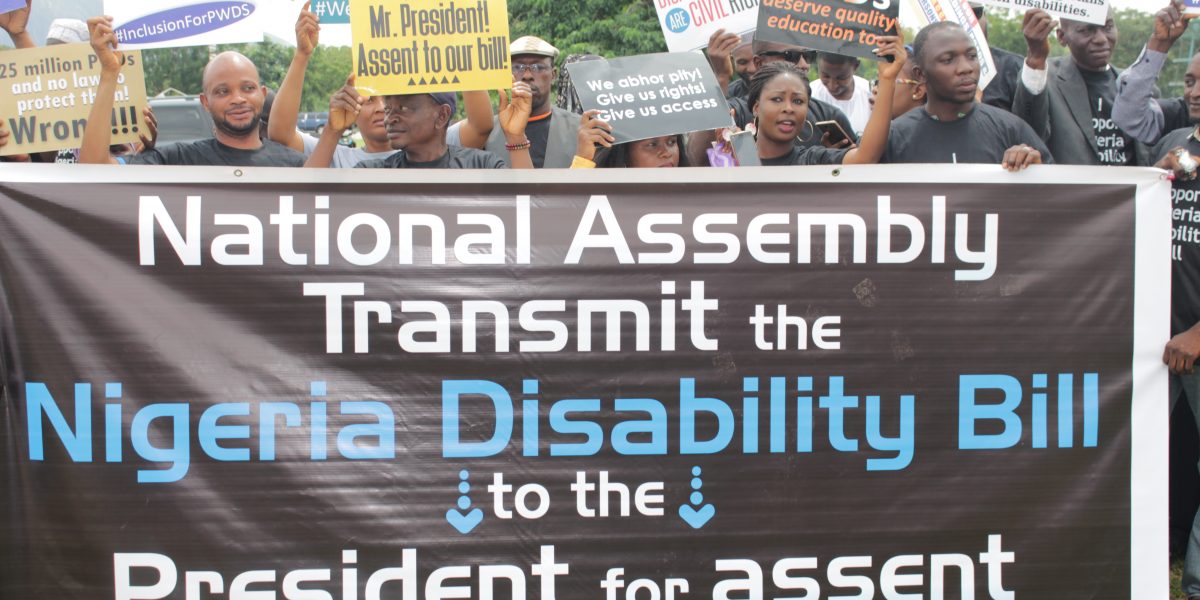 Present Bill On Persons With Disabilities To Presidency, Centre Pleads With NASS

October 17, 2018 Written by CCD Nigeria. Posted in Uncategorized No Comments

The Nigerian Disability Community on Wednesday pleaded with the National Assembly to transmit the Discrimination Against Persons with Disabilities (Prohibition) Bill to the presidency for assent.

Mr David Anyaele, Executive Director, Centre for Citizens with Disabilities (CCD) during a protest in Abuja, said that the absence of the bill was a hindrance to their basic human rights.

Anyaele said that Persons with Disabilities faced the denial of their basic human rights such as the right to health, education and employment.

“Laws and policies need to be created to ensure that these barriers are removed and PWDs are involved or carried along in the nation development agenda.

“A national legislation on disability will eliminate the different forms of barriers which prevent the full integration of Persons with Disabilities into the Nigerian society,’’ he said.

Anyaele, however, said that the Nigerian disability community acknowledged the efforts of both chambers of the National Assembly in passing the “Discrimination Against Persons with Disabilities (Prohibition) Bill.

He solicited the immediate transmission of the bill to the Presidency for assent, expressing worries that the National Assembly had failed to place the completion of action on the disability bill as priority.

“It has been 36 months since the Bill was introduced at the 8th session of the National Assembly.

“We are concerned that the National Assembly may abandon the completion of action on the disability bill,’’ he said.

Anyaele said that as a nation, it was impossible to achieve national development without addressing the barriers faced by PWDs and that top of the list was the Nigeria Disability Bill.

Responding on behalf of the Senate President Bukola Saraki, assured the group of the commitment and determination of the National Assembly to bring the bill into law.

“We are very conscious of the fact that people with disabilities have for long been neglected, marginalised and ostracised

“It is our belief that people living with disabilities are also humans and should be treated as such,’’ he said.

Saraki commended the leadership of the coalition for its courage and determination in driving a peaceful protest which he said was a fundamental right.

Available records indicate that the population of Persons with Disabilities in Nigeria is approximately 25 million persons.

The disability bill would provide rights of persons with disabilities access to public premises, aids at public building, access to road, side walk, protection against risk and humanitarian emergencies and prohibition of using PWDs for begging.