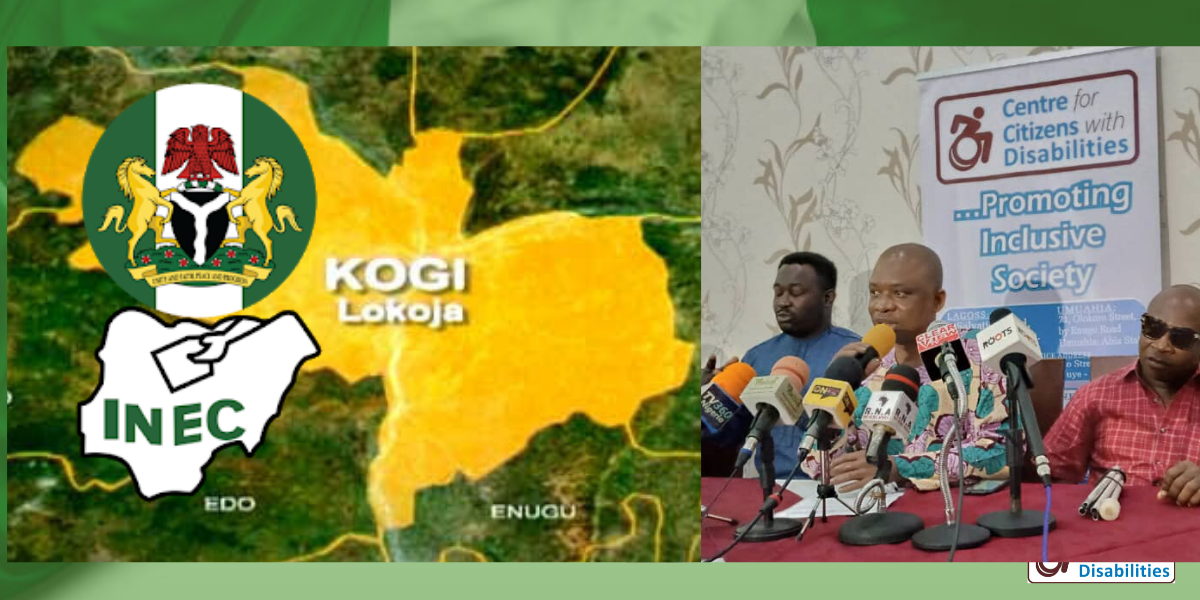 Kogi Polls: Preliminary Statement Issued by the Centre for Citizens with Disabilities (CCD)

November 19, 2019 Written by CCD Nigeria. Posted in News No Comments

We wish to commend the good people of Kogi State for coming out to Vote for the Governorship and Kogi West Senatorial Elections despite the volatile electoral environment in the State.

We also commend INEC ad-hoc staffs for their resilience in the face of security uncertainty in 2019 Kogi State elections, as many of these ad-hoc staffs saw more than they bargained in their efforts to serve their father’s land.

We applaud PWDs election observers for the risk they took in observing the election in the midst of security challenges in the state. We counted our observers, no one suffered any injury, and no one is missing.

Key Findings:
Our observers observed that the majority of the polling units visited provided priority voting for voters with disabilities. We commend INEC ad-hoc staffs for ensuring that voters with disabilities had minimal struggle to the polling Units through granting them priority voting which is in line with the provisions of the National Disability Act.

Ballot Materials
In over 120 polling units visited, only 2 polling units were sighted with Magnifying glasses, even within the state capital, Lokoja. Materials printed in bold, instructional material in Braille or Braille Ballot guide were limited in the field as more than 80% of polling units visited had none of these materials. This is at the disadvantage of the blind, deaf and persons with albinism. This put a question mark on the much talked about provisions for voters with disabilities

Security
There were serious security challenges in most of the Local Government Areas observed during the governorship election in Kogi State. For instance, there was pandemonium in Iyara town at Ward 8 PU 004, where the voters were attacked and forced to vote for a particular political party, electorates had to scamper for safety. Gun taunting thugs made it difficult for the electorates to excise their franchise. PWDs could not exercise their franchise in these polling units.

In Ajaokuta LGA, Ganaja Township polling units 009 Ward 014, the election was peaceful at the center with about 20 pulling units until about noon when thugs begin to threaten the electorates. Also Ward 14 PU 013 FFN Junior Worker 1 and Ward 13 PU 005 LGA Dispensary, a threat to the life of electorates started as early as 9.45 am by the thugs representing a political party. You either vote for the party or leaves the venue. There was an incident of an electorate who was attacked by machetes when he resists any attempt to make him vote for a particular political party.

Vote Buying
Money in politics, particularly on Election Day, has become a serious issue in Nigeria. Unfortunately, in vote selling and buying, the security agents have compromised as they aid in electioneering trading. It was so bad in Ward 15 PU 15 Investra ASCO, Ajaokuta LGA that the vote-selling came with a threat. The manipulation and threat were so bad that the agents buying votes will collect the ballot papers from the electorates, to be sure that the vote was cast for their candidates, they will thumbprint on it and return it to the electorate to drop it in the ballot box.

In conclusion:
What happened on the 16th of November 2019 Governorship and Kogi West Senatorial Elections was not an election but warfare to capture Kogi State, as the elections cannot be said to be free, fair, credible nor inclusive.
Based on the level of violence experienced by voters In Kogi State in the presence of over 31,000 men and women of the Nigeria Police, we called on Nigerians to demand accountability on the role of the Nigeria Police in the insecurity that characterized the election.