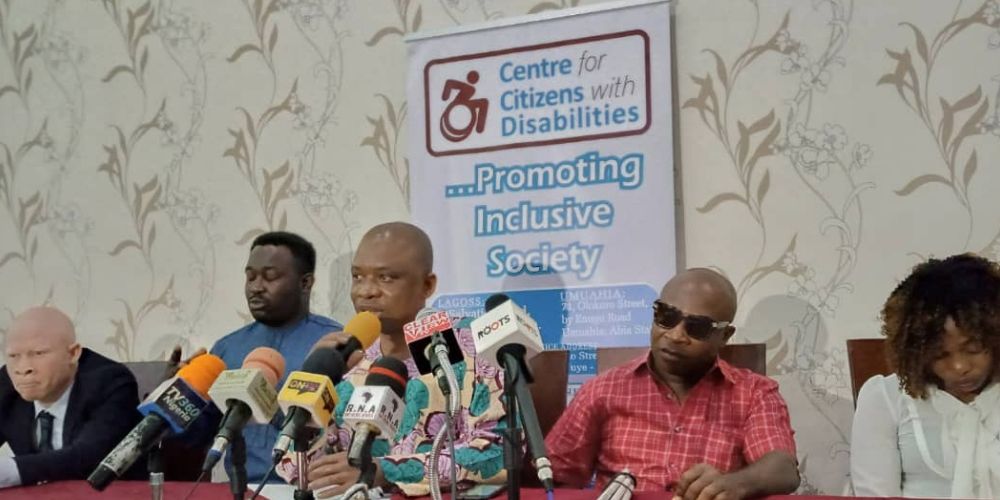 Persons with Disabilities in Nigeria have called on President Muhammadu Buhari to appoint one of them as minister to represent them in the Federal Executive Council.

Addressing a press conference, the Executive Director of the Center for Citizens with Disabilities (CCD), David O. Anyaele frowned at the exclusion of PWDs in the list submitted to the Senate for screening by the President.

He noted that the objective of this press conference was to raise awareness over the exclusion of Nigeria with disabilities in the list of Ministerial nominees and the delay in the implementation of the National Disability Act by the government.

He said the PWDs were dissatisfied with the list of the ministerial nominees that President Buhari sent to the Senate without a single person with disability in the list, describing it as total disregard to the provision in part 6, section 29 of the Discrimination against Persons with Disabilities (Prohibition) Act.

“We call on President Mohammadu Buhari to speedily send at least three additional competent names of persons with disabilities as ministerial nominees to enable them to join other nominees for screening at the Senate.

He commended the President for signing the National Disability Act which according to him ended the 18 years struggle to secure legislation that would protect more than 25 million Nigerians with disabilities against discrimination and other harmful practices.

His words “While we use this platform to thank all those that sponsored the bill since the year 2000 at the National Assembly, these distinguished Nigerians include: Sen. Chris Adighije, Hon. Jerry Ugokwe, Sen. Bode Olajumoke, Hon. Abike Dabiri, Sen. Nurudeen Abatimi-Usman, Sen. Francis Alimikhena, and Hon. Ochiglegor Idogbo as well as their colleagues at 5, 6, 7 and 8 sessions of the National Assembly.

“The success of the passage and assent of the President on the National Disability Act were achieved with an uncommon push from the Nigeria Media, with special support from our partners (OSIWA, RoLAC, The Kingdom of the Netherlands, Australian High Commission Abuja) amongst others.

“The purpose of the Act is for the full integration of persons with disabilities into the society by establishing National Commission for Persons with Disabilities vested with the responsibilities to ensure education, health care, social, economic and civil rights of PWDs in Nigeria.