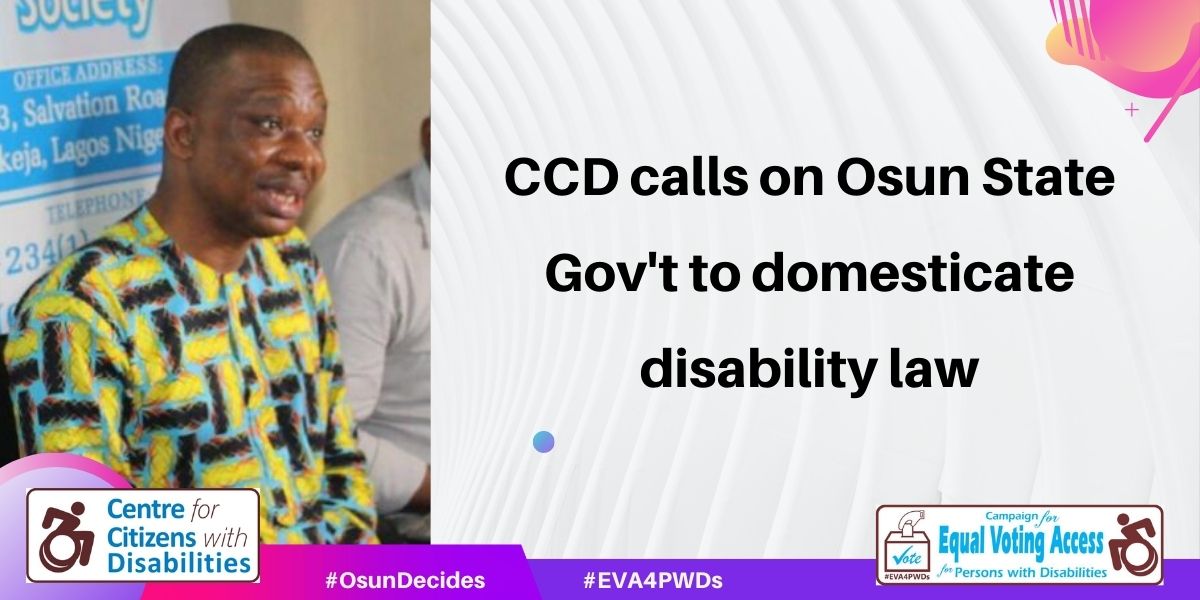 July 11, 2022 Written by CCD Nigeria. Posted in News No Comments

The Centre for Citizens with Disabilities (CCD) as part of its advocacy in mainstreaming the rights of people with disabilities in the electoral process has called on the government of Osun State to sign into law and begin the immediate implementation of the National Disability Rights law.

This call was made at a virtual Public Presentation of Findings from CCDs Assessment of INEC’s Preparations for Persons With Disabilities (PWDs) for the 2022 Osun State Governorship Election with critical stakeholders in the Nigerian development space in attendance.

In his opening remarks the Executive Director of the Centre for Citizens with Disabilities, David Anyaele said part of the job of the organization is to monitor compliance of State institutions to relevant disability laws particularly the national Disability law, the Electoral Act, government policies as it relates to persons with disabilities and the United Nations Convention on the Rights of Persons with Disabilities.

The Executive Director recalled that last month they made similar presentations in Ekiti State which led to massive reforms in the State gubernatorial elections vowing not to relent in their quest to ensure compliance with laws and policies that make life meaningful for persons with disabilities.

Contributing in the same vein Mr. Ugochukwu James co-Convener of the Nigerian Civil Society Situation Room hailed CCD for their efforts at issues concerning persons with disabilities, saying it was as a result of CCD’s efforts that the discriminations against person with disability (prohibitions) act was passed into law.

In her remarks Chief of Party SCALES Lydia Odeh stated that it is very important that INEC rolls up its sleeves judging from the Ekiti State elections and make adequate improvements in Osun, saying there is the adequate legal framework but there is need for more advocacy.

Presenting the findings from the report, the Centre says key finding from the assessment include: Disability cluster group leaders in Osun State are satisfied with INEC engagement with them through seminars, roundtable discussion, workshops, and training as regards the inclusion and involvement of PWDs in the forthcoming elections in the State.

Significant number of PWDs during the key in-depth interview have good knowledge of relevant disability related laws on election. Data collected questionnaire administration shows that 64% of respondents are aware of the discrimination against persons with disability (Prohibition) Act 2010, while 35.8% are not aware. On knowledge of the INEC framework on disability – 41% are aware, 59% are not aware of the framework.

Even though INEC has assured them that security would be provided, recent killings in Owo, Ondo State is a source of the security concern. This is best explained using findings from the questionnaire administration as 72% of the respondents indicated that they are concern about their safety and security, whereas 28% indicated safety and security is not an issue to them.

The Centre called on INEC not to leave any stone unturn in the implementation of the its framework on persons with disabilities, Electoral Act 2022, National Disability Rights Act and the Convention on the Rights of Persons with Disabilities during the forthcoming elections in Osun State.

Take bold steps to improve on accessibility of Polling Units in Osun State for all PWDs, particularly for those on wheelchairs and crutches .as majority of facilities used for elections are State owned.

This could be achieved through siting of Polling Units in accessible environments. Make available disability related materials accessible for all PWDs.

These include ensure the availability of Form EC40H at the Polling Units, and assistive resources such as tactile ballot jackets, braille ballot paper and magnifying lenses;
Train election day ad-hoc staff adequately to appreciate their roles and responsibilities to PWD Voters. Findings from previous election observations shows that an average INEC Ad-hoc staff don’t understand what assistive devices for PWDs means.
Ensure the mainstreaming of PWDs issues in public sensitizations to reverse negative public perceptions and attitudes towards them. The level of engagement of INEC with the disability community in the State is impressive.

However, the general public needs to be carried along as well.

Mainstream issues of concern in the deployment of security architecture for the election.
This possible through sustained collaboration with the security agencies to reassure the electorate of their safety and security, to reduce tension and brace up security challenges especially in some flashpoints to ensure accessible, credible, free, fair, and peaceful elections.

The Executive Director, CCD appealed to the media to:The Media Houses in Osun State and other media election stakeholders to take appropriate measures to mainstream issues of people with disabilities in their narratives on the election. This is to ensure inclusivity in media engagements on the elections. Supportt in raising awareness and public enlightenment on the National Disability act, INEC framework on persons with disabilities, the newly signed Electoral Act 2022 and promote the passage of the Disability Bill by the Osun State Government.

He further called on the Civil Society organizations to assist in extending voter’s education and capacity building to persons with disabilities at the Local Government Area.

Collaborate with INEC and other stakeholders to support INEC-trained PWDs to step-down the training to their members in the rural areas. This is to ensure no one is left behind in voter education, Interface with cluster group leaders to step down information on voters’ education and training from INEC to their cluster members.

This will ensure that no cluster is excluded in citizens mobilizations for the election.