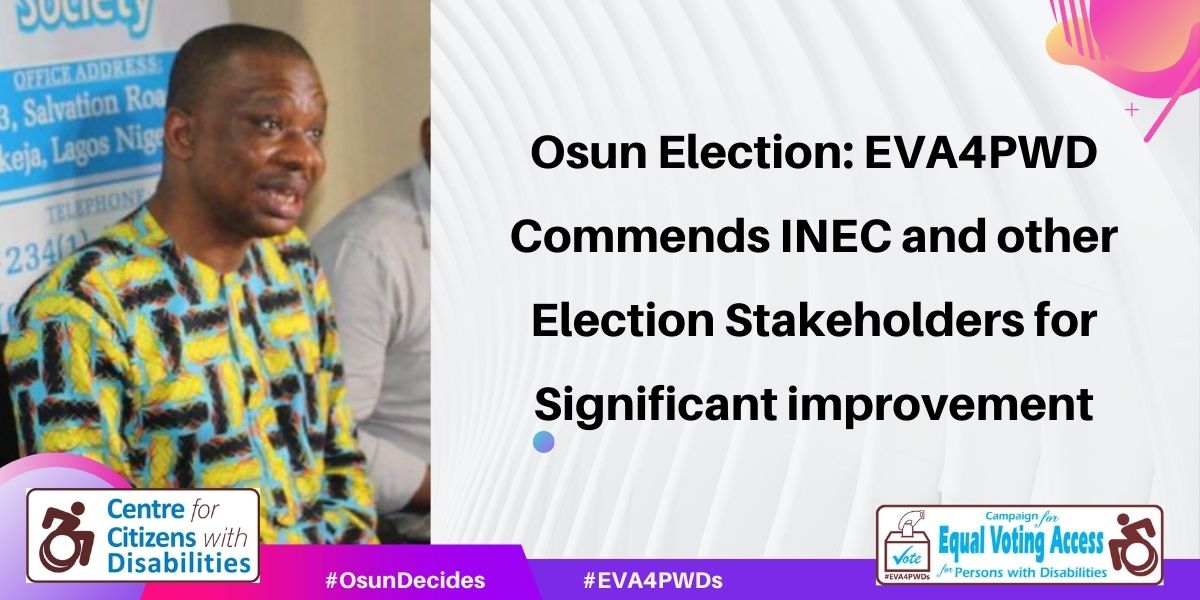 July 16, 2022 Written by CCD Nigeria. Posted in News No Comments

The Campaign for Equal Voting Access for Persons with Disabilities (EVAPWD), a program of the Centre for Citizens with Disabilities (CCD) engaged in the observation of the July 16, 2022 Osun State Governorship Election organised by the Independent National Electoral Commission (INEC), has commended the electoral body and other stake holders on the conduct of the election.

Mr David O. Anyaele, the Chairman, Campaign for Equal Voting Access for Persons with Disabilities in a press statement commended INEC and other election stakeholders for the significant improvement on accessible polling units as INEC ensured that PWDs and other vulnerable groups enjoyed priority at the PUs, assistive devices such as Braille guides, shade and magnifying glasses and siting of significant number of PUs in accessible environments.

Anyaele also applauded the level of security provided by the security agencies, not withstanding that INEC Ad-hoc staff struggled to administer form EC40H to PWD, as Voting Guidelines were missing at most of the PUs visited.

The statement reads: “The key objective of the observation exercise was to observe provisions made by INEC for persons with disabilities’ participation in the election; and raise awareness on equal voting rights for citizens with disabilities. It was an opportunity to assess the election management body’s compliance to the provisions of the Discrimination against Persons with Disabilities (Prohibition) Act, section 54 of the Electoral Act 2022, INEC Framework on Access and Participation of Persons with Disabilities, and the Nigeria Constitution 1999 as amended”.

“EVAPWD commends the Independent National Electoral Commission (INEC) for the conduct of today’s election, as we observed that Polling Units (PU) were opened as early as 8am, and good voter turnout at the Polling Units observed”.

“EVAPWD is impressed to observe that marginalized populations – the aged, nursing mothers and pregnant women and persons with disabilities were offered priority voting in most of the polling units observed.

“EVAPWD observed that significant PUs were accessible to persons with physical disabilities.

Observation shows that INEC sited a significant number of PUs along the Roadside and dropped the ballot boxes on the floor, whilst a good number of other PUs were sited in building with access for those on wheelchairs”.

“That notwithstanding, EVAPWD is dissatisfied that significant number of Polling Units observed were not accessible. Notably, P U 9, Ward 3 in Boripe LGA was not accessible as it was too high and filled with steps and grasses. Also, in PU 4, Ward 10, Ede South LGA, PU 8, Ward 5, Ede South, PU 8, Ward 10 in Odo- Otin, and PU 5, Ward in Osogbo were sited across gutters. Also not accessible is PU 2, Ward 9, and its environs in Aiyedire LGA were sited across gutters or in schools with steps and high pavements. What this means is that voters with physical disability would struggle much more to cast their votes”.

“EVAPWD observed the deployment of Braille guides, shade and magnifying glasses in the significant number of the PUs visited. In particular, PU 8, Ward 10 0din-Oti LGA, PU 4, Ward 10, Ede South LGA and others were seen with assistive devices for PWDs. This is commendable as INEC has made observable improvement in this regard”.

“EVAPWDs is pleased to note that security provisions were adequately provided in each PU visited. EVAPWD observed that form EC40H was readily available, but the knowledge of INEC ad-hoc staff around the use of this document remains weak, even as Voting Guides for the deaf in a significant number of the Pus were not seen”.

“In conclusion, EVPWD commend INEC and other election stakeholders for the significant improvement on accessible polling units as not only did INEC ensured that PWDs and other vulnerable groups enjoyed priority at the PUs, assistive devices such as Braille guides, shade and magnifying glasses and siting of significant number of PUs in accessible environments”.

“EVAPWD is pleased with the level of security so far provided by the security agencies, not withstanding that INEC Ad-hoc staff are struggling to administer form EC40H to PWD, even as Voting Guidelines were missing at most of the PUs visited”.