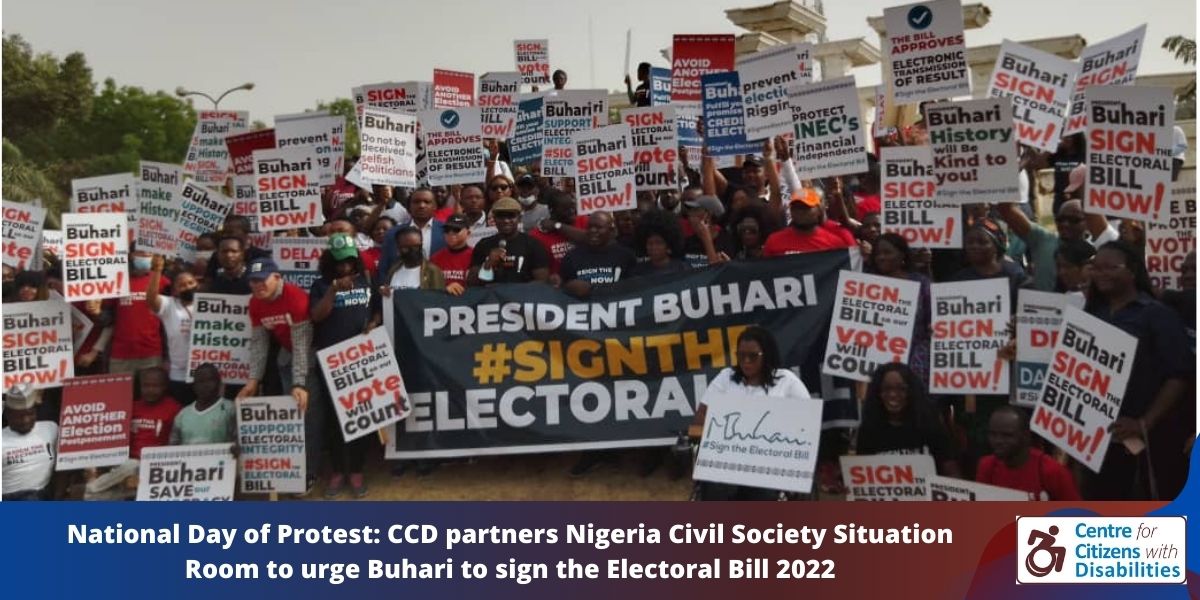 February 22, 2022 Written by CCD Nigeria. Posted in News No Comments

The Centre of Citizens with Disabilities (CCD) on Tuesday, 22nd February 2022 partnered with the Nigeria Civil Society Situation Room, Yiaga Africa and other CSOs in a protest towards urging President Muhammadu Buhari to sign the electoral bill transmitted to him by the National Assembly on the 31st of January, 2022.

Recognizing that the bill made favourable provisions for citizens with disabilities, the Centre’s Executive Director; Mr. David Anyaele, mobilized Persons with Disabilities (PWDs) to protest at the Unity Fountain, Maitama, Abuja, and urge the President to sign the bill, thus that the Independent National Electoral Commission (INEC) can issue a timeline for the 2023 General Election in Nigeria.

According to Mr. Anyaele; “the bill which not only embraces inclusion and innovation but is also a bill that promotes transparency and accountability in Nigeria’s electoral process is a great input since the return of democracy in 1999”. He went further to urge the president to sign the bill as swiftly as possible and write his name in Gold as someone who enhanced the democratic tenets that brought him to power.

During the protest rally, speeches were made by Samson Itodo of Yiaga Africa, Ene Obi who is the convener of Nigeria Civil Society Situation Room, and a host of other Executives of the plethora of Civil Societies Organizations, who in one voice, demanded that President Buhari, gives swiftly his assent to the electoral bill.

PWDs participated actively at the protest march as all clusters were represented at the event.