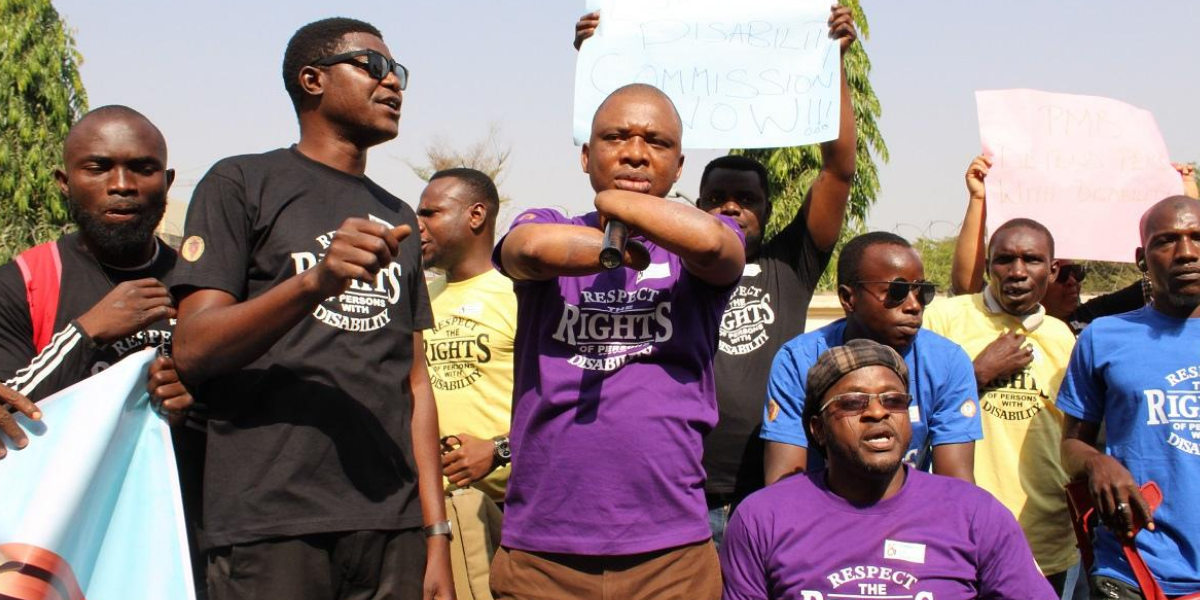 IVLP GOLD STAR: COMMEMORATING THE 30TH ANNIVERSARY OF THE ADA WITH DAVID ANYAELE

August 21, 2020 Written by CCD Nigeria. Posted in News No Comments

In 2017, Mr. David Anyaele was invited on a multi-regional project with participants from 16 different countries on a project titled “Marginalized Populations and Health Care.” Since Mr. Anyaele’s first IVLP he has continued his work advocating for the rights of people with disabilities in his home country of Nigeria. He played a critical role in the passing of the National Disability Rights Act in 2019. Recognizing Mr. Anyaele’s continued work and success supporting disability rights, he was invited to participate on the IVLP Gold Star in July of 2020 to commemorate the 30th anniversary of the passing of the ADA in the U.S. Mr. Anyaele participated in one of IVLP’s first fully virtual exchange programs.

During Mr. Anyaele’s project he engaged with advocates for disability rights from Washington, DC; Pittsburgh, PA; and Reno, NV.

After a federalism briefing and virtual tour of the Franklin Delano Roosevelt Memorial, he began his project by virtually “visiting” Pittsburgh. This portion of his program was developed in partnership with GlobalPittsburgh. His meetings included a roundtable discussion with young disability rights advocates from the Consumer Health Coalition, the University of Pittsburgh, The Parent Education & Advocacy Leadership Center, and the Thomas Merton Center. He also met with representatives from Human Engineering Research Labs, UPMC Resource Disabilities Center, and University of Pittsburgh’s Department of Rehabilitation Sciences and Technologies to discuss the creation and use of technologies and services for individuals with Disabilities.

During both the Pittsburgh and the Reno program, Mr. Anyaele also had the opportunity to participate in virtual home hospitality. He first reunited with his home hosts in Reno from back in 2017, to share updates on his life, work, and successes. Later in the program, he met with a family from Pittsburgh who provided a virtual home tour, which included the housing updates they installed to support a family member who is in a wheelchair. Mr. Anyaele concluded his project portion in Pittsburgh with a public media interview hosted by The Conference, a public radio station.

The second week of the program provided Mr. Anyaele with an opportunity to reconnect with resources in Reno, Nevada through the Northern Nevada International Center (NNIC); a city he had visited on his first program in 2017. NNIC arranged a reunion with representatives from the Disability Resource Center, Nevada Disability Advocacy and Law Center, and Northern Nevada HOPES to discuss care and resources for people with disabilities, and how their respective organizations continue to support people with disabilities through the COVID19 crisis. As part of his virtual visit to Reno, Mr. Anyaele shared his experience with his own disability, his advocacy efforts, and his successes in supporting people with disabilities in Nigeria during a live public presentation that was facilitated by the Honorable Frances Doherty, who is the longest standing family court judge in Reno, overseeing numerous cases related to disability rights.

Mr. Anyaele concluded his program by viewing the award-winning film Crip Camp and discussing it’s themes and topics with a group of young people, age 16 to 23, interested in advocacy work. The youth came with questions about effective grassroots organizing, peaceful protest and civil disobedience, and Mr. Anyaele’s personal experiences affecting change. Mr. Anyaele was equally inspired by these youth and now hopes to start a mentorship program to continue working with young advocates to fight for the rights of marginalized people. Moved by the recent passing of John Lewis, he called on these youth activists to keep working for equal rights and making “good trouble” for a better future. This discussion with youth was a fitting end to the program and fully encapsulated the goals Mr. Anyaele’s Gold Star IVLP: to continue advocating and strengthening ties between activists to create a more global impact on disability rights.

Mr. Anyaele hopes the visibility this program brought to Nigeria will give him a platform to further his efforts for disability rights, help him to mobilize youth in the fight for advocacy, and allow him to continue making his own “good trouble.”