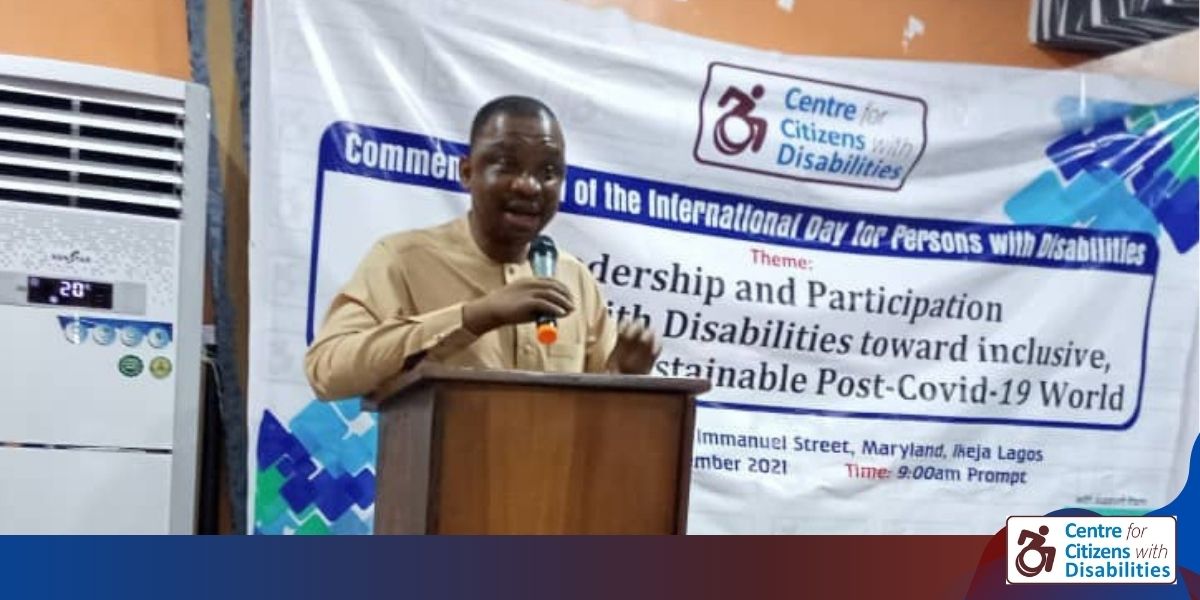 December 5, 2021 Written by CCD Nigeria. Posted in News No Comments

As Nigeria marks the Internationals Day for Persons with Disabilities 2021, 31 million Nigerians under the auspices of Civil Society Organisation, the Centre for Citizens with Disability (CCD), demanded that President Muhammadu Buhari to sign Electoral Bill removing barriers they face in a bid to exercise their franchise.

This was contained in a statement signed by the Executive Director, CCD, David Anyaele, where they made their position known during a peaceful march in the nation’s capital, Abuja.

The statement reads in part, “We are marking this day at a time Nigerians are waiting the assent of the President on a Bill for an Act to Repeal The Electoral Act No. 6, 2010 And Enact The Electoral Act 2021, to Regulate the Conduct of Federal, State And Area Councils In the Federal Capital Territory Elections; And for Related Matters.

“The Bill provides for the removal of barriers that hinders citizens with disabilities from participating in the electoral process on equal basis with others. We call on President Muhammadu Buhari to sign into an Act the Electoral Bill without further delay to open space for necessary actions towards 2023 General Elections.

“We are worried that 34 months after the passage of the Disability Rights Act, only 13 States have demonstrated measures to adopt the Act. We commend States like Lagos, Anambra, Ekiti, Ondo, Plateau, Bauchi, Kano, Kaduna, Jigawa, Kogi, Niger, Kwara, and Niger States for the passage of disability law in their States.”

They also called on States governments yet to adopt the National Disability Rights Act to do so without further delay.

“This is important because failure in this regard is an indirect endorsement of discrimination and other harmful practices against their citizens with disabilities.

“It is important for State governments to make inclusion and participation of citizens with disabilities in governance and development programmes a priority, as it is very expensive and difficult to live with disability without government support”, it pointed.

However, they commended the National Assembly, especially, the Federal House of Representatives for the establishment of an ad-hoc Committee on Disability Affair with Hon. Miriam Onuoha as its Chairperson.

“We are calling on the Senate and States House of Assemblies to borrow a leaf from the Federal House of Representatives by establishing similar ad-hoc Disability Committees to ensure that issues of persons with disabilities are given priority at State and Federal level.

“We are concerned that thirty-four months after the passage of the Discrimination against Persons with Disabilities (Prohibition) Act 2018, citizens with disabilities are still left behind due to non-implementation of the Act by Ministries, Departments and Agencies (MDAs).

“This is evidenced by the non-provision of necessary measures to enhance access to buildings of these MDAs, and inclusion of citizens with disabilities in their programmes and activities.

“We are worried that more than 18 months after President Mohammadu Buhari gave directives to MDAs to pay special attention to the peculiarities of persons with disabilities in the formulation and implementation of their policies and programmes, and where suitable their employment, and MDAs are not responsive to the directives.

“The President went further to direct that all relevant Government agencies pay special attention to the peculiarities of persons with disabilities in the formulation and implementation of their policies and programmes, and where suitable their employment. Regrettably, exclusion of PWDs in MDAs programs and activities has continued.

“We call on heads of Ministries, Departments and Agencies to operationalize these directives by the President to ensure the full implementation of the Disability Rights Act.”

However, the statement accused States of not making budgetary provisions for persons with disabilities to change their narrative.

“We are worried that many States across the Federation are struggling to make reasonable budgets for the integration and rehabilitation of citizens with disabilities, even when they are budgeted, persons with disabilities hardly benefit from such provision.

“However, we commend States like Lagos State, Plateau, Ondo and Anambra States that have taken measures to not only pass disability bills but have taken steps to create offices for disability affairs in their various States.

But the statement warned that, “Acknowledging that Nigeria has signed the United Convention on the Rights of Persons with Disabilities including it optional protocols, we state that SDGs will not be achieved if state and non-state actors continue to discriminate, isolate, and marginalize over 31 million Nigerians with disabilities in planning and implementation of the SDGs in Nigeria.

“We wish to appreciate the media and specifically your organization for their continued support to the efforts of the disability community towards increasing the voice of the voiceless (Nigerians with disabilities) in our society through inclusive reportage.

“We urge organisations of, and for persons with disabilities not to relent in their efforts of promoting and creating awareness on the disability issues at Local, State and Federal level to enhance public understanding, as nothing about us with us.”