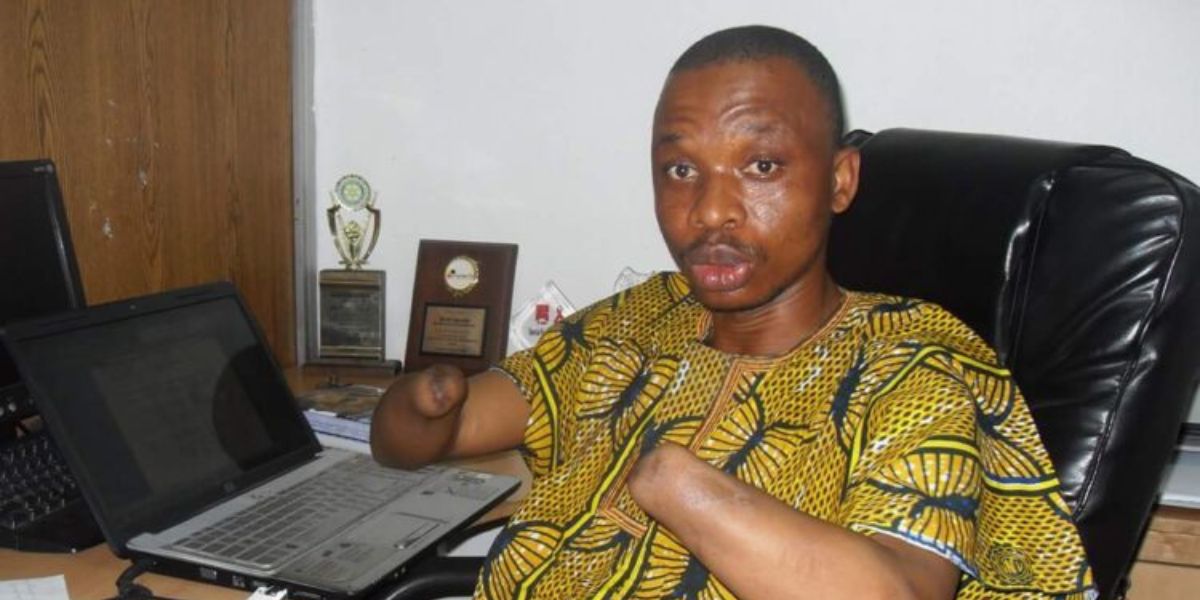 December 3, 2022 Written by CCD Nigeria. Posted in News No Comments

Anyaele in a press statement to mark this years International Day of People with Disabilities also raised the concern that Section 2 of the Disability Act, which provides that the Federal Ministry of Information shall make provisions for promotion of awareness regarding-
(a) the rights, respect and dignity of persons with disabilities,
(b) the capabilities, achievements and contributions of persons with disabilities to the society; has not happened for four years after the passage of the Act.

He said Ministries, Departments and Agencies (MDAs) of the Federal and States governments are doing little or nothing to ensure the full implementation of the disability law.

The statement reads:
“We are excited to join disability movements across the globe to commemorate this year’s International Day of Persons with Disabilities. December 3 is a date set aside annually for the observance of the International Day of Persons with Disabilities. The day was proclaimed in 1992 by the United Nations General Assembly resolution 47/3.”

“The theme of this year’s event is “Transformative Solutions for Inclusive Development: The Role of Innovation in Fueling an Accessible and Equitable World“. This year’s event is an opportunity to reflect and to ask critical questions on the extent that the Federal government and its subnational are responsive to the full integration of persons with disabilities into the society and ensuring for their education, health care and the protection of their social, economic, and civil rights.”

“We are impressed with State governments that have adopted the Discrimination against Persons with Disabilities (Prohibition) Act 2018 or passed disability laws in their respective States. The last time we checked the following States have a law that protects their citizens with disabilities: North Central (Kogi, Kwara, Nasarawa, Niger, and Plateau States), Northeast (Bauchi State), Northwest (Jigawa, Kaduna, Kano, Sokoto and Zamfara States), Southeast (Abia, and Anambra States), Southsouth (Cross River, and Edo States) and Southwest (Ekiti, Lagos, Ondo, and Oyo States). We are calling on Akwa Ibom, Adamawa, Bayelsa, Benue, Borno, Delta, Ebonyi, Enugu, Imo, Ogun, Osun, Katsina, Kebbi, Gombe, Rivers, Taraba, and Yobe States government to take appropriate measures to protect their citizens with disabilities without further delay through the adoption of the Disability Act.”

“We are concern that Section 2 of the Disability Act, which provides that the Federal Ministry of Information shall make provisions for promotion of awareness regarding- (a) the rights, respect and dignity of persons with disabilities, (b) the capabilities, achievements and contributions of persons with disabilities to the society; this has not happened for four years after the passage of the Act. Line Ministries, Departments and Agencies (MDAs) of the Federal and States governments are doing little or nothing to ensure the full implementation of the disability law. This is made obvious through the *none* prioritization of disability issues in budgetary provisions by 16 Federal MDAs responsible for disability affairs in Nigeria. This is made worse in States with a disability commission with little or no resources for operations, turning them into institutions of begging. Therefore, if the governments are not implementing the disability laws in the land, who will protect the rights of PWDs? We call on members of the Federal and States House of Assembly to demand for the budgetary provisions and activities from all Ministries, Departments, and Agencies for the full implementation of the Disability Law.”

“Interestingly, we are marking this year’s world disability day less than 83 days for Nigerians to go to the Polls for the 2023 General Elections to select their leaders from the States to Federal Houses of Assemblies, and from State Governors to the President. The elections campaign are ongoing across the Federation, unsurprisingly, issues of critical importance to the disability community are missing in the manifestos of front line political parties. This is indicative that the in-coming government may struggle to prioritize inclusion and participation of persons with disabilities in government programs and activities as their operational documents do not indicate how citizens with disabilities would be part of the government. People with disabilities and their families as well as concerned citizens should demand from political parties’ candidates’ agenda for persons with disabilities. PWDs and their organisations must document disability related promises made by candidates in order to hold them to account for the general elections.”

“Recognizing that poverty is the major cause of disability across the world, even as disability itself pushes individuals to poverty as well; we are worried that while we are clamoring for the reduction of incidence of disability in our society, it is alarming to note that more than 133 million Nigerians have been plunged into different dimensions of poverty. This is a dangerous signal as government policies and programs in the past hardly reached the disability community and the possibility of reaching them in the future is slim as it appears in the non-inclusion of PWDs in the political party manifestos. We are calling on the Federal and States government to ensure that efforts to push down poverty curves in Nigeria are not only disability sensitive, but with active participation of PWDs and their organisations.”

“We appreciate the efforts of the Independent National Electoral Commission’s (INEC) efforts in implementing their framework on Access and Participation of Persons with Disabilities (PWDs) in the Electoral Process. Evidence from the last election conducted by INEC shows that there is relative improvement in terms of inclusion and access to the electoral process. As the last phase of activities before the 2023 general elections is about to commence, we are seriously worried about the rate of insecurity and lack of political tolerance among political parties and their candidates. This situation is a driver of voter apathy, low participation of vulnerable groups in the electoral process. We are calling on the INEC to improve on the successes recorded in Osun State to ensure equal voting access for persons with disabilities. People with disabilities should be encouraged to go for early collection of their Permanent Voters Cards (PVC) even as we request for priority considerations in line with the provisions of the National Disability Act and INEC Framework on PWDs. We are also calling on the security agencies to push back this ugly scenario as the 2023 general elections provides an important opportunity for each and every registered voter to decide his or her future. No one should be left behind in the electoral process by reason of insecurity.”