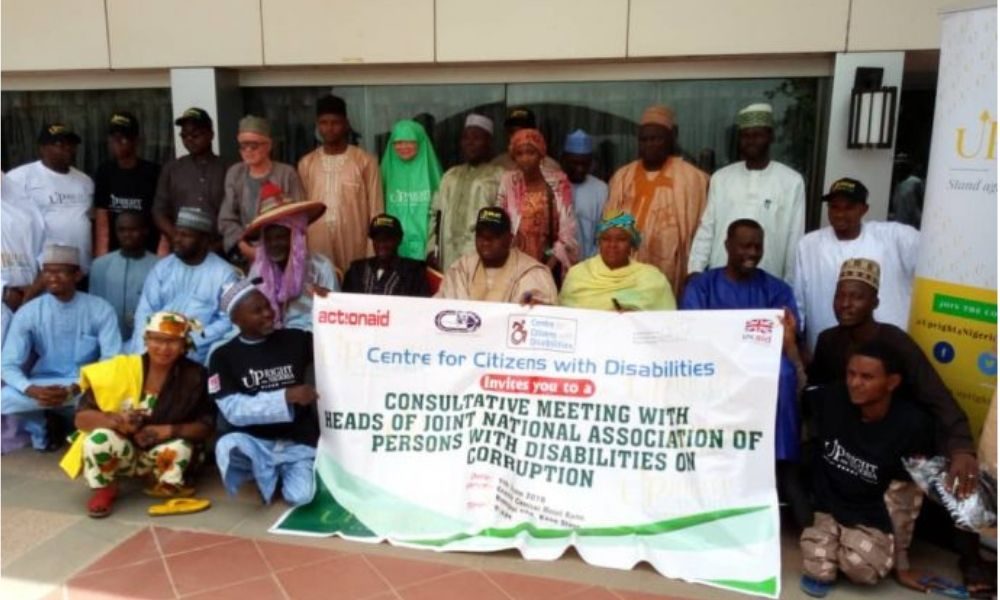 In the final press statement issued at the end of the consultative meeting with Organisations of Persons with Disabilities (OPDs) on the anti-corruption fight in Nigeria organized by the Centre for Citizens with Disabilities on Friday, June 7, 2019, at Grand Central Hotel, Kano, Kano State.

The Centre for Citizens with Disabilities (CCD) has began consultations with organisations of persons with disabilities in the North-West geo-political zone for conscription into anti-corruption fight through #UpRight4Nigeria; Stand against Corruption Campaign beginning from Kano State. The Campaign which is being implemented through a UKAid funded project on Strengthening Citizens Resistance against Prevalence of Corruption (SCRAP-C) is aimed at contributing to a reduction in corruption as a result of changing public attitudes that increasingly disapprove of corrupt activities.

In his opening remark by the Founder/Executive Director, Centre for Citizens with Disabilities (CCD) Mr. David O. Anyaele ably represented by the Senior Program Officer, Mr. Kola Ogunbiyi commended organisations of persons with disabilities in Nigeria and Kano State in particular for their interest and commitment in the fight against corruption in our society, which has been demonstrated by the turnout of heads of PWDs organisation present at the Consultative meeting.

Mr. Anyaele further stated that CCD is committed to strengthening the capacity of organisations of persons with disabilities in Nigeria to contribute to the fight against corruption in Nigeria. This, according him informed the project, which is currently running in South East-Enugu State and South South- Akwa Ibom State, as the project will also be lunched among organisations of persons with disabilities in South West- Lagos State; and Kaduna State.

Mr. Anyaele called on persons with disabilities to join forces with other relevant civil society organisations to stand against corruption through refusal to participate in corrupt practices; refuse to give or take bribe, gratification before carrying out services; to uphold the value of honesty, integrity, transparency and hardwork.

In addition, some of the strategies agreed at the meeting after exhaustive deliberation was to adopt awareness creation, community dialogue , compound meetings, media programmes, advocacy Visits, engaging the traditional rulers and religious leaders as a vehicle for actualising SCRAP C project.

The SCRAP-C is an anti-corruption project that is being implemented by 6 Consortium of six National Civil Society Organizations – ActionAid Nigeria, Centre for Democracy and Development, Centre for Communication and Programmes in Nigeria and three other implementing partners including WARDC, HEDA, and Centre for Citizens with Disabilities (CCD).