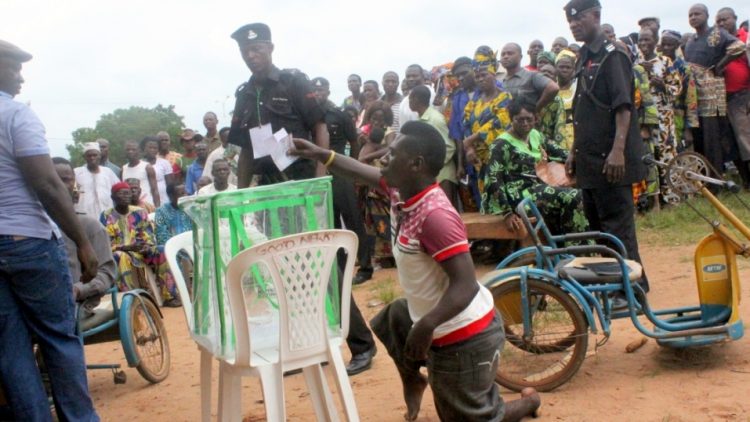 Enugu: PWDs lament inaccessibility of most polling units during elections

People Living with Disabilities (PWDs) have lamented their inability to access most polling units during the general elections of February 23 and March 9 in Enugu state.

The PWDs, who were participants at a workshop and voted at the just-concluded elections, were of the view that although most of them voted, but it was with much constraints on movement and crossing drainages in most polling units.

However, they lauded the INEC’s efforts to ensure that PWDs enjoyed priority voting
at the polling units.

“This is in line with the recently passed Discrimination Against Persons with Disabilities (Prohibition) Act 2019 by President Muhammadu Buhari which provides that in anywhere or event that there is a queue, PWDs should be given priority.

“We frown at inaccessibility of most of the polling units especially polling units that are outside disability centres. This is an area INEC needs to take measures to improve on,’’ they said.

The PWDs noted that provision of Braille materials and magnifying glass were invisible to blind voters in the state, as one of the participants observed that INEC polling officials were ignorant of what Braille material is all about.

They observed that sign language interpreters and voting procedures were nowhere to be found at the polling units.

“The deaf community complained bitterly of accommodation at the polling units as they were denied priority voting, including a deaf woman with pregnancy was not allowed to enjoy priority voting,” they said.

The PWDs said that the major document that would have aided INEC to plan for persons with disabilities in subsequent elections form EC40H was not administered by polling officials during the election.

According to them, the CCD mapping exercise prior to the 2019 general elections in the state was treated with levity among associations of persons with disabilities due to infighting within the groups.

“This affected CCD’s support to Enugu state INEC in terms making provisions for eligible citizens with disabilities for the general elections,’’ they said.

They called on INEC to take appropriate measures to close these gaps to improve persons with disabilities participation in the electoral process.

Earlier, the CCD executive director, Mr David Anyaele, said the centre was pleased that the general elections showed that persons with disabilities participated in mass in the electoral process as evidenced in the turnout of PWDs across the country.

“CCD is assuring participants that they will support INEC and PWDs in Enugu state to enhance equal voting access for persons with disabilities in future elections.

“CCD appreciates the INEC REC for Enugu state, Dr Emeka Ononamadu, for
his support to PWDs in the state,’’ Anyaele said.

Participants in the workshop were drawn from Joint National Associations of Persons with Disabilities (JONAPWD) Enugu state chapter and other organisations of the PWDs including the blind, deaf, physically challenged, spinal cord injured association members and leprosy survivals.

Other participants include officials of INEC, members of the Civil Society Organisations (CSOs) and the media.