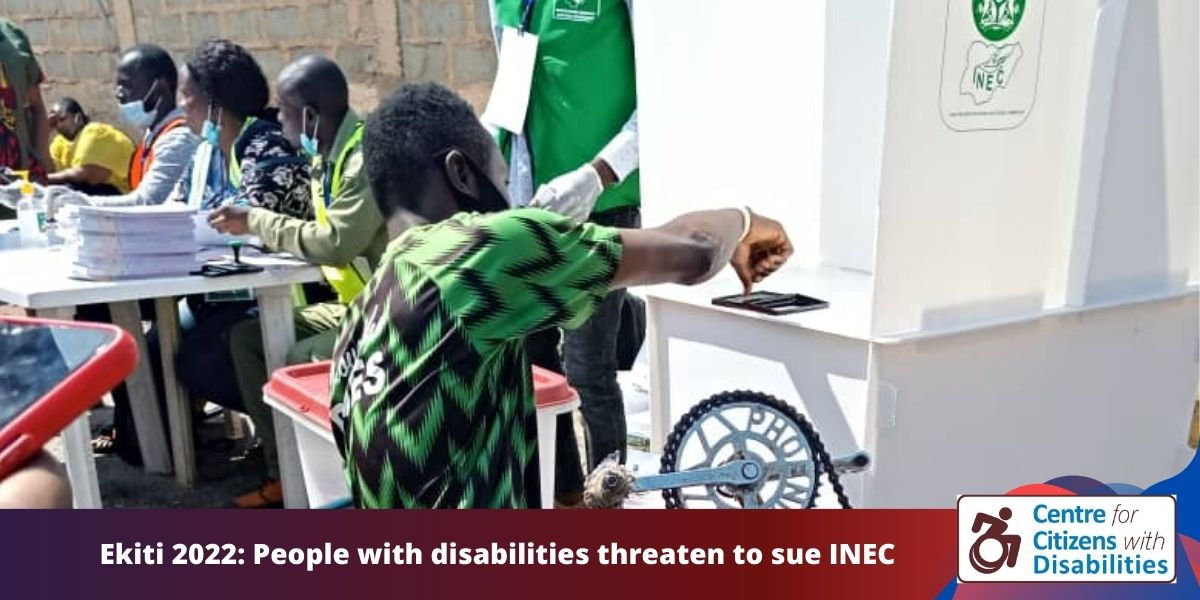 People living With Disabilities (PWDs) have have said the Independent National Electoral Commission (INEC) have failed to provide materials for their inclusion in the electoral process as it concerns the June 18 governorship election in Ekiti State.

In that regard they have threatened to take INEC to Court for the breach of a provision of the law protecting citizens with disabilities.

The Executive Director, Centre for Citizens Living With Disabilities, David Anyaele, told journalists in Ado Ekiti on Monday that the National Disability Law has mandated INEC to provide materials for inclusion of PWDs in all elections.

Mr Anyaele said every attempt to prevent members of the group from voting due to INEC’s laxity will be challenged in court, adding that such would amount to a breach of the law signed by President Muhammadu Buhari.

On the issue of security, Mr Anyaele said the PWDs are deeply worried due to persistent cases of thuggery during election, urging INEC to partner police and other security agencies to checkmate this.

“Up to now, we learnt the INEC has not made some materials ready to sensitise the PWDs, particularly the form EC40H,” he said.

“It is also the duty of INEC to allow the deaf to bring sign specialists to polling units for proper voting. To resolve this, there must be disability desk officers across all the polling units.

“The reason why we are here is to hold INEC into account. It is no longer a charity for INEC to provide enabling environment for PWDs to vote. Before, it was INEC may provide materials for PWDs to participate, but the law has changed it to INEC shall.

“We are here to observe INEC compliance and any failure, we are going to use every legal instrument to compel INEC to comply. It is not about Ekiti alone, but we are also impressing that in Osun.”

While condemning vote buying, he urged his members not to engage in the act, describing it as economic deprivation.

“People can’t be mortgaging their future or trivialise the electoral system by selling their votes. Bad governance affects everybody, including the PWDs, so it is necessary that we stay away from such evil,” he said.

A report presented by the Center’s Research Officer, Humphrey Ukeaja, revealed that 95 perncent of people living with disabilities in Ekiti were are prepared to vote, saying 80 pe cent of them already had their Permanent Voter Cards (PVCs).

“The report showed that 44.2 per cent of them found some of the polling units inaccessible, they are complaining about topography,” Mr Ukeaja said.

“Reports by some of the leaders of PWDs in Ekiti confirmed that INEC has not been taking steps to carry them along in the process of electioneering. There is need for interactions between the INEC and the PWDs for them to be fully part of the electoral process.”

The Chairman, Joint National Association of People Living With Disabilities, Ekiti chapter, Kayode Owolabi, also noted that INEC had not been carrying his members along as expected .

Mr Owolabi threatened that his group would sue the commission if such continued to manifest.

“The way INEC treated us was bad in the past, but we are seeing improvement. We appeal to them to provide disability desk officers and braille ballot papers that can enable those with visual impairment to vote for the candidates of their choices.”

INEC had recently assured that it had made adequate preparations to improve the participation of Persons with Disabilities (PWD) in the upcoming gubernatorial elections of Osun and Ekiti.

Mr Raji said equipment was provided to ensure the electoral framework and environmental barriers were fixed.

He said that the INEC wanted more inclusive elections and had taken some steps to ensure that PWDs were included in the electoral processes.