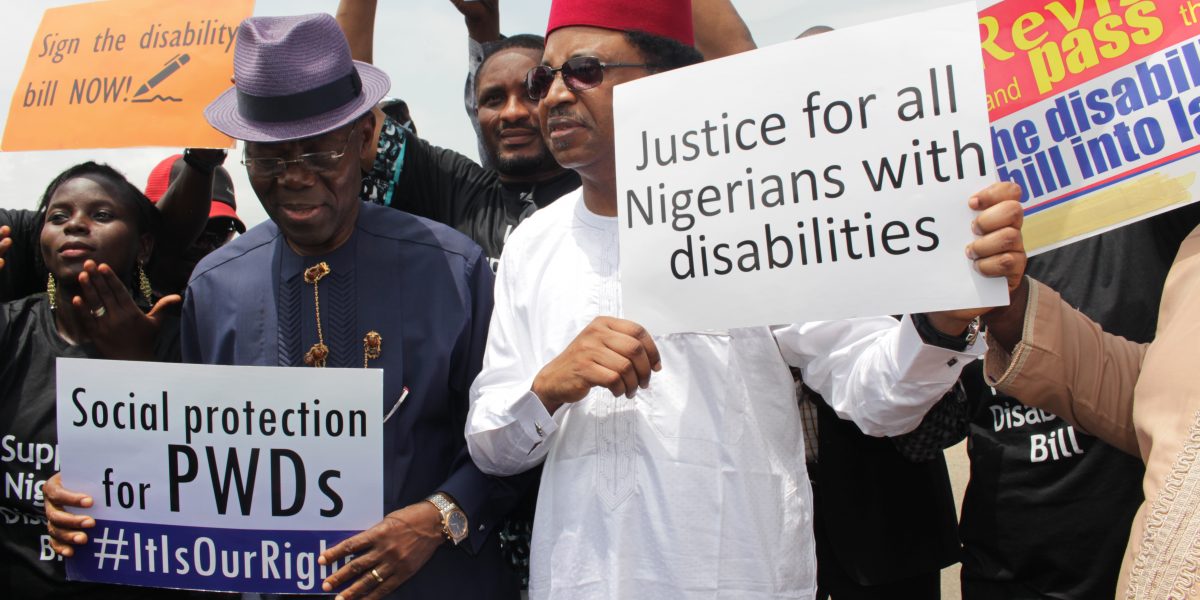 October 17, 2018 Written by CCD Nigeria. Posted in Uncategorized No Comments

GROUP of persons living with disabilities under the aegis of Coalition of Disability Organizations on Wednesday issued 7 days ultimatum to the National Assembly (NASS), to transmit the Nigerian Disability Bill to the President for assent.

Speaking in Abuja at the group protest to the National Assembly, the Convener of the group, David Anyaele stated that if NASS fails to send the document to the President in the next 7 days, people living with disabilities all the 36 states of the federation will sit out in protest against NASS for discrimination and insensitivity to the suffering of people.

According to him, “in the light of the above, the following can be cited as clear points as to the reason why immediate action needs to be concluded on Nigeria Disability Rights Bill by the National Assembly.

“It is a fact that Persons with Disabilities face the denial of their basic human rights, such as the right to health or the right to education and employment. Therefore laws and policies need to be created to ensure that these barriers are removed. A National Legislation on Disability will eliminate the different forms of barriers which prevent the full integration of Persons with Disabilities into the Nigerian Society.”

He said “Signing the Bill into law would maximally boost human capital development by encouraging indigenous and foreign participation of persons with disabilities into economic, social and political development of the country.

The group, therefore, stated that “failure to do the needful from now till the end of next week will result to the massive mobilization of our members across the Country for sit-out campaigns at various locations in the major cities of the Country.

While receiving the protesters on behalf of the leadership of NASS, Senator Shehu Sani noted that “it is the duty of every responsible government to ensure that every member of society is treated fairly, able or disable.”

“What you are asking for is your right to be treated like a human being, and I can assure you that we (NASS) will swiftly do needful so that the President will sign the bill into law ” he assured them.

The Nigerian Disability Right Bill was adopted in April 2018 by the Joint Conference Committee of the National Assembly Report on the Discrimination against Persons with Disabilities (Prohibition) bill and it has been waiting for the transmission to the President for assent since then.