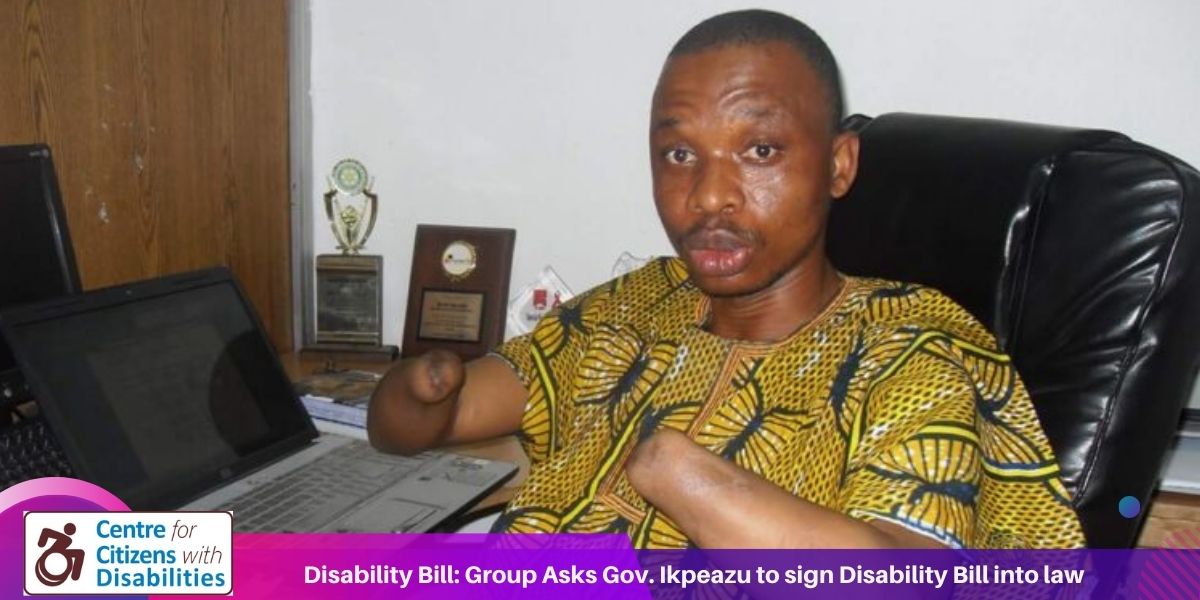 August 31, 2022 Written by admin. Posted in News No Comments

Centre for Citizens with Disabilities (CCD) has called on the Governor of Abia State, Okezie Ikpeazu to without hesitation sign into law the Abia Disability Bill after the legislative document scaled the mandatory third reading on the floor of the State House of Assembly on Wednesday.

Executive Director, Centre for Citizens with Disabilities (CCD), David Anyaele in a statement welcomed the passage of the bill; pointing out that the action of lawmakers in the State House of Assembly has further demonstrated the commitment of the State government to the welfare and wellbeing of the people of Abia State especially those living with disabilities.

He said the bill when passed into law will mark the beginning of a new era of liberty and freedom and the end of the years of marginalization, exclusion and even discrimination Persons with Disabilities (PWDs) have endured in Abia State as a result of the absence of such a robust legal framework.

“Persons with disabilities in Abia State are the most excluded in governance at the subnational level in Nigeria due to absence of legal framework for the protection of the rights and dignity”.

“With the passage of this bill, the end of exclusion of Abians with disabilities in governance by State and none State actors is coming to an end”.

The CCD boss called on the Clerk, Abia State House of Assembly to ensure the bill is urgently transmitted to Governor, Ikpeazu for prompt assent to the bill.

“I called on the Gov. Okezie Ikpeazu not to hesitate to sign the bill into law as his wife has committed so much to get this bill passed”

” I thank Mrs. Nkechi Ikpeazu, wife of the Governor of Abia State for her solidarity with the disability community during this campaign for the passage of the bill. Mrs. Ikpeazu addressed the House of Assembly on the 15th of July 2021 on the need to pass the Disability Bill”.

” I appreciate the disability community in Abia State for the resilience, consistency, and pushing in advocating and lobbying for the passage of the bill”.