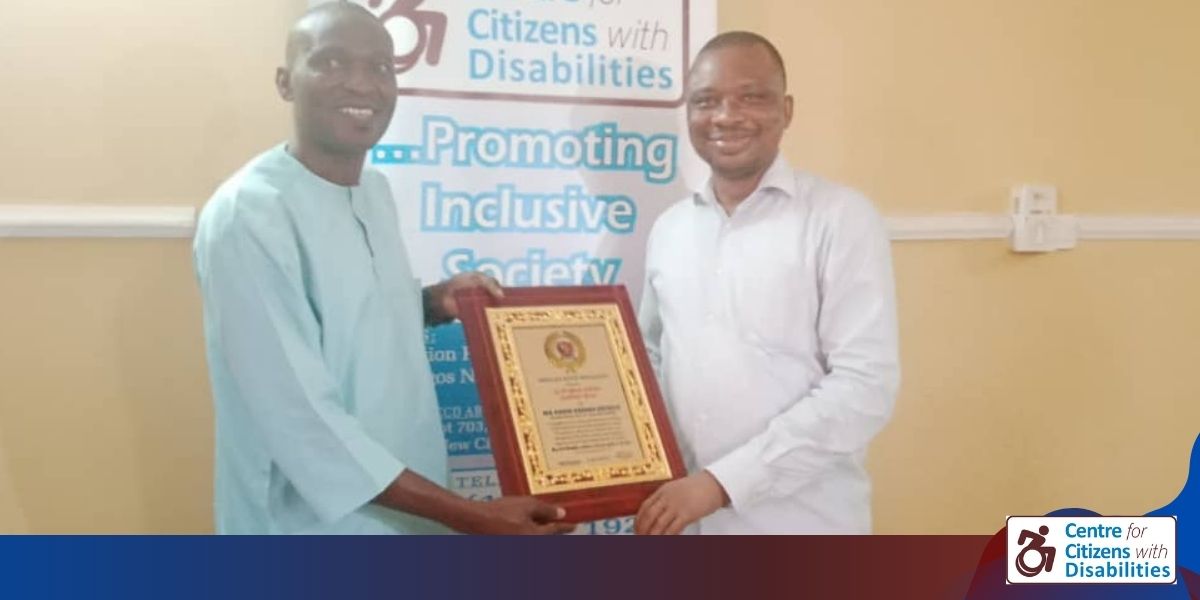 November 7, 2021 Written by CCD Nigeria. Posted in News No Comments

The Executive Director of Centre for Citizens with Disabilities, Mr. David Obinna Anyaele has bagged the patriotic leadership award from the African Voice Magazine.

The award was presented to Mr. Anyaele in recognition of his contribution to humanity and his course to promote inclusion for over 31 million persons with disabilities in Nigeria.

Mr. Ebenezer Ogunleye who presented the award on behalf of Africa Voice Magazine praised Mr David Obinna for his passion, zeal, and commitment to issues and plights that concern humanity, particularly in his push to make sure that the disability bill was passed into law in 2019.

He went further to allude, to the fact that the Executive Director is a worthy recipient and was selected and nominated by worthy Nigerians for the Award.

Mr David Obinna, while receiving the award on behalf of the CCD Board of trustees, staff and volunteers nationwide disclosed the historical journey of the creation of CCD in 2002, while he maintained that he remains committed to disability issues.

He thanked the African Voice Magazine for finding it worthy to give an award to a genuine course.

In attendance at the award-given event were CCD’s Staff; Mrs Peace Ezekiel, Ubong Daniel, and Humphrey Ukeaja. The entourage was led by Mr. Ebenezer Ogunleye, CEO of African Voice Magazine. Others on the entourage are; Diana Omueza, Olawale Oladipupo, and Gami Tadanyigbe.