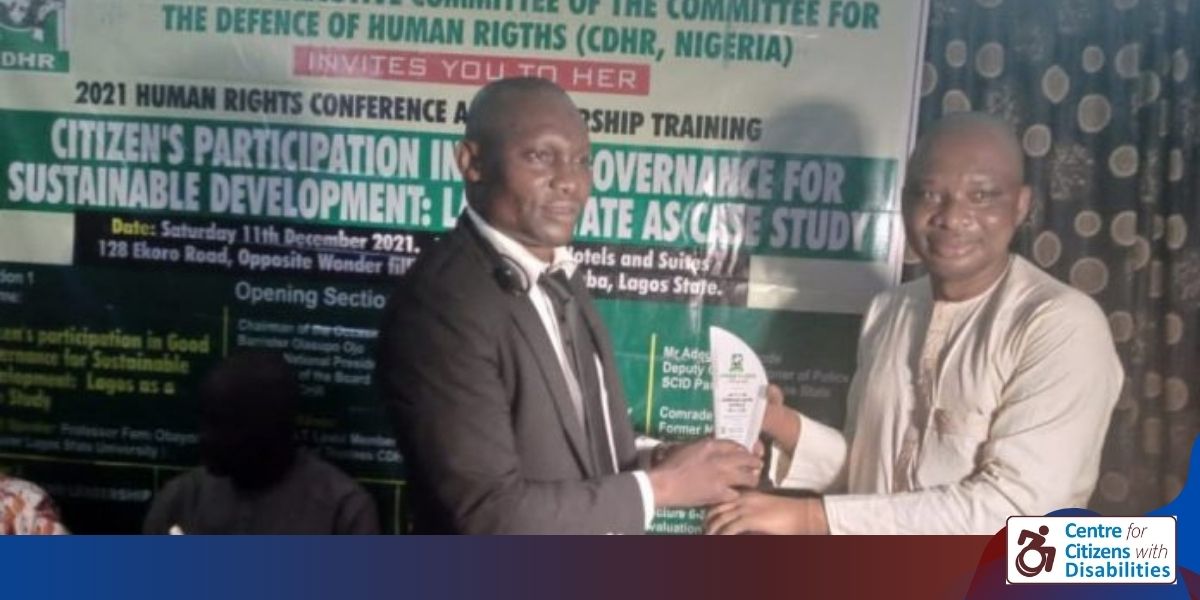 The Committee for the Defence of Human Rights (CDHR) has conferred the Defender of Justice Award to Comrade David O. Anyaele, Executive Director Centre for Citizens with Disabilities and Convener, Coalition of Disability Organisations in Nigeria.

The Award which was conferred to Comrade Anyaele at the Annual General Conference of the CDHR is in recognition of his service to the nation.

Presenting the Award to Comrade Anyaele at the just concluded 2021 Human Rights Conference and Leadership Training held in Lagos as part of the activities to commemorate the Human Rights Day, the President of the Committee for the Defence of Human Rights Dr. Kahinde Taiga described David as a man that has touched lives not only in Nigeria but across the world.

He further described him as someone who has been fighting for the rights of persons with disabilities, which he has done through leading the campaign for the passage of Disability Bills at the national and State levels.

“He has contributed positively to human capital development as such we present this Award to encourage him to do more. We are recognizing you as a person that have affected lives, you have fulfilled the aims of CDHR, being a member and a man that has been fighting for the rights of the oppressed, speaking for the voiceless (persons with disabilities) – Dr. Taiga said.

While encouraging David to do more, Dr. Taiga said: “We recognize you with this Award to continue to urge you to do more. You should not stop at this junction, but we pray that God will continue to give you life, protect you, guide your family and give you more strength, and continue to possess you with that heart of fearlessness”.

Earlier in his presentation at the training, Comrade Anyaele called on CDHR to mainstream issues of disability rights in the programs and activities of the Committee.

“I call on the leadership of CDHR to review its constitution to include persons with disabilities as members of the Board of Trustees and Executive members of the organisation at the National, States and Local Government Units.”