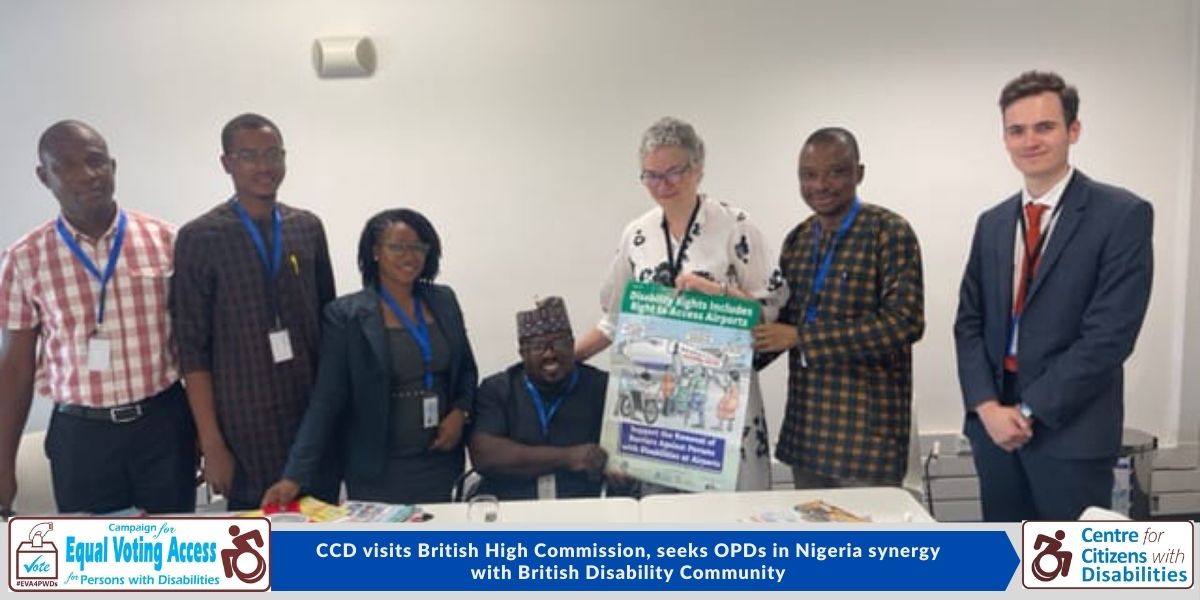 July 7, 2022 Written by CCD Nigeria. Posted in News No Comments

Centre for Citizens with Disabilities (CCD) on Today, 6th July, 2022 paid a courtesy call to the British High Commission where they were granted a 30 minutes audience to interact with The high commissioner to highlight its research findings from various studies and also discuss areas of possible partnership and collaborations.

The advocacy entourage was led by the Executive Director of CCD; Mr David Anyaele.

The meeting was hosted by the Deputy High Commissioner; Gill Atkinson, who welcomed all guests and introduced herself and her partner.

While exchanging pleasantries, she expressed her excitement welcoming the group and told the advocacy group that she is passionate about disability issues because she is a person with disabilities, saying that she has epilepsy and she has been struggling and managing it since she was 13 years old.

Mr. David while introducing his entourage, expressed gratitude to the British Commission, stating that CCD has enjoyed a wonderful relationship with them, as the first grant the organization got, was from DFID.

He went further to thank the commission for its role in promoting democracy and good governance in Nigeria since 1960.

After a brief history and introduction of CCD, Mr . David went ahead to relay the organization’s effort towards data gathering, the vital role played by the organization in the 18 years of struggle that led to the successful signing of the National Disability law, role played in the establishment of the National Commission of Persons With Disabilities which mandate is to seek compliance with the law and promotion of the Rights of Persons with Disabilities in Nigeria.

The Deputy High Commissioner hinted that the signing of the National disability law is big progress, but it is now time to tackle the cultural issues surrounding disability issues in Nigeria.

In reaction to that Mr David requested that the British commission should assist CCD to reach out to disability organizations in Britain and learn from them and that there is need for jingles promoting access to electoral process by Persons With Disabilities come 2023, it will help to enhance the public understanding about access to Electoral process by PWDs.

The Deputy Commissioner, assured CCD, that they will get back to them with contact persons in the United Kingdom.