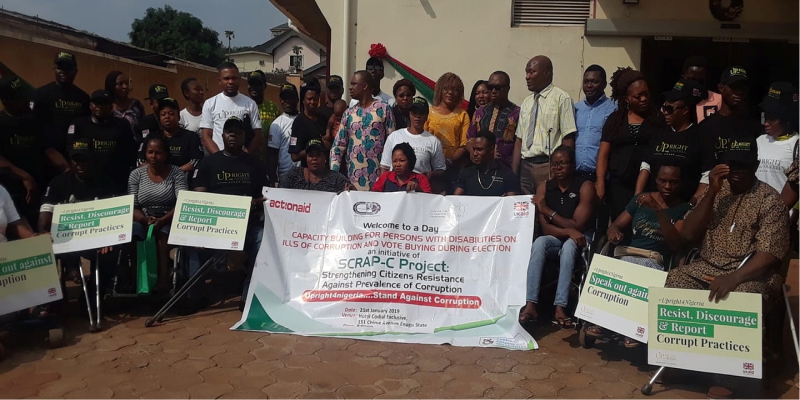 Centre for Citizens with Disabilities, CCD, says electoral corruption and vote buying increases incidences of disabilities in all ramification as it leads to malfunctioning of the entire polity.

Its Executive Director, David Anyaele, said this in a one-day workshop on Capacity Building for Persons With Disabilities (PWD) on `Ills of Corruption and Vote Buying During Election’ held in Enugu on Monday.

The workshop is part of project tagged `Strengthening Citizens with Resistance Against Prevalence of Corruption (SCRAP-C)’, implemented by the centre in partnership with Action Aid.

Anyaele noted that there was need to sensitize participants especially PWDs, on dangers of vote buying and its implication to persons with disabilities.

According to him, recognizing that there is poverty in the land with persons with disabilities being the most poorest of the poor, there is a need to ensure that PWDs do not join the negative trend.

“Acknowledging that many persons with disabilities have minimal access to information especially the implication of vote buying and selling during election, this workshop is apt and highly necessary now.’’

Anyaele noted that considering that persons with disabilities are poor and from poor family background and any offer of money to such persons for vote might be attractive, but wrong and dangerous for their future.

“CCD is calling on stakeholders to join forces to sensitize citizens on implication of vote buying and selling and it is our hope that participants will go back to their various communities to sensitize others against the trend,’’ he said.

“Provision of magnifying lenses to aid the visually impaired and albinos in casting their votes unassisted.

“The commission has also cited polling units in areas accessible to wheelchair users.

“Introduction of written instructions at polling units to enhance the participation of the hearing impaired.

“The use of sign language instructors at all major programmes organized and or executed by INEC,’’ she said.

The News Agency of Nigeria (NAN) reports that over 60 PWDs from different organizations drawn from three senatorial zones of Enugu State attended the workshop.