March 22, 2018 Written by CCD Nigeria. Posted in Blog No Comments

ABUJA-Federal Ministries of Justice, Women Affairs and Social Development on Tuesday in Abuja respectively pledged renewed commitments to the passage of the Nigerian Disability Bill into law.

Also committed to the cause was the National Human Rights Commission, NHRC, which said that the issues of disability touched on its core mandate to ensure that the rights of all Nigerians as well of other foreign nationals resident in the country were not trampled upon.

The parties made the pledge at a one day “Stakeholders Forum on Nigeria Disability Bill”, organized by Centre for Citizens with Disabilities, CCD.

Recall that there are over 25 million Nigerians currently living with one form of disability or another to whom the Speaker of House of Representatives, Hon. Yakubu Dogara last week promised a face-lift through the passage of the bill.

Speaking at the Forum, the Senior Special Assistant to the President on Justice Reforms, Barrister Juliet Ndukaku represented by Mr. Suileman Daodu of the Federal Ministry of Justice said that the Attorney-General of the Federation, Mr. Abubakar Malami was not averse to bill.

He said that it was the utmost wish of the Ministry to see to the passage of the bill into law to give most physically challenged Nigerians a sense of belonging.

Daodu however underscored a need for synergy between the concerned stakeholders to rectify areas of hitches in the bill that may stall presidential assent.

He said: ” Yes, in relation to the bill, Federal Ministry of Justice is in support of this bill. In fact, the Justice Sector Reforms formed a large part of our plan for the year which we are also implementating along with our partners including the Rule of Law and Anti-corruption.

“We are very committed in terms of the passage of the bill. But what I have said is to envisage the likely challenges that may delay in terms of assent because when this bill finishes from the National Assembly, it comes back to the Attorney-General. The President will be relying on the advise of the Attorney-General and it is at that point that he forms a legal duty to advise him. So, we want to make that even when it comes to implementation, funding, what can we put forward.”

Also speaking, the representative of the Ministry of Women Affairs, Mr. Onah Uche said that they were in full support of the bill.

He said that the Ministry was planing to produce jingles for enlightenment on the importance of the bill.

On her part, Mrs. Jumoke Olaoye from the Legal Department of National Human Rights Commission said it was the responsibility of the Commission to ensure that disabled Nigerians were not discriminated against.

Highlighting the essence of the forum, the Executive Director of Center for Citizens with Disabilities, Mr. David Anyaele said that the people were hopeful that the bill would soon be passed by the national assembly having secure the commitment of all the appropriate authorities.

“The purpose of this forum is to mobilize stakeholders around the Disability Bill to ensure that all obstacles and barriers that will hinder the assent of the president are taken care of. We appreciate the National Assembly, the House of Representatives in particular for adopting the report of the Joint Committee for the harmonization of the Disability Bill. We also appreciate Senate for taking appropriate steps to ensure that they adopt the report of the joint committee and when this happens, it means that the bill has been passed and we will start counting 30 days for the president’s assent.

“We have been in this particular junction for more than four times. That’s why we feel we bring all stakeholders both the supporters and antagonists of the bill for us to look at it together and provide answers to questions that may occur in the course of waiting for the assent of Mr. President; to ensure that each stakeholder buys into it, knows their roles and responsibility to ensure that not only that the bill is signed into law but also key stakeholders take measures to play their own role in the implementation of the Disability Bill.

“The Senate president told us about a month ago that the bill is going to be adopted within 30 days. As I speak, the House of Representatives last week Thursday adopted their report. So, we are expecting that the senate will adopt their own report before the end of this week. 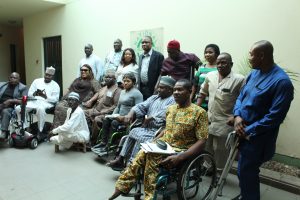 “We have not seen any hitches so far. What you are looking at as playing the devils advocate. That’s to say, should there be a hitch, what do we respond to. But as at today, there is no hitch. The president made a commitment to sign the bill into law as soon as it gets to his desk. So, we believe that all the systems of the States will respond to it”, Anyaele explained.