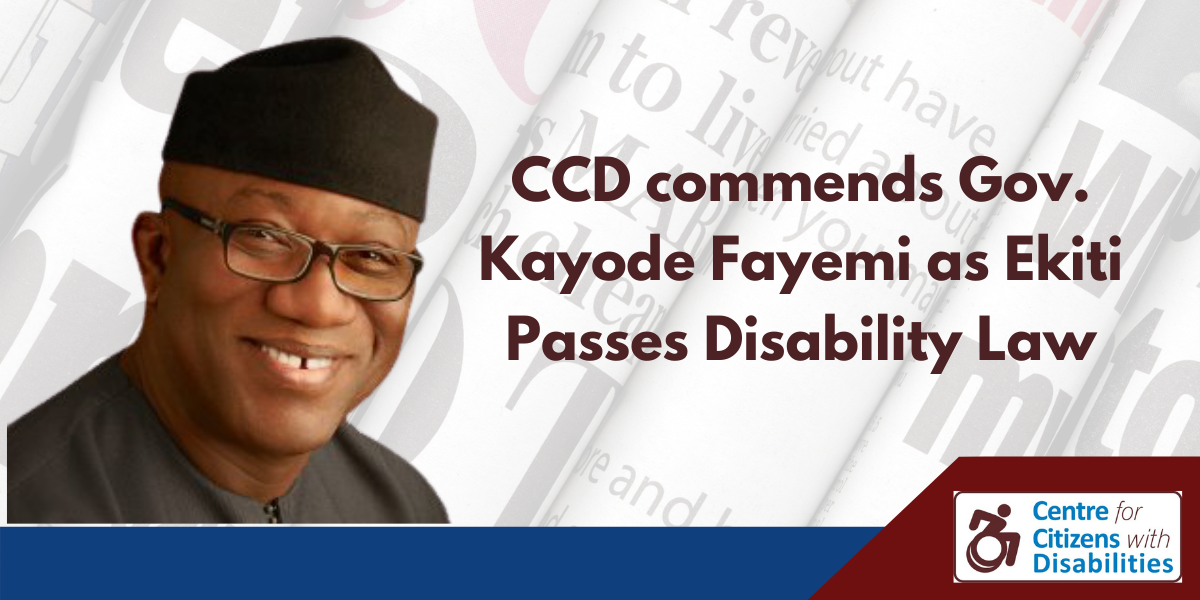 The Centre for Citizens with Disabilities (CCD) has commended Ekiti State Governor, Dr. Kayode Fayemi for passing the Ekiti State Disability Law. CCD also applauded the appointment of a person with disability as Senior Special Adviser on Disability Matters in line with the provision of law.

In a press statement signed by Kola Ogunbiyi, Senior Program Officer, CCD, the organisation noted that the efforts of the lawmakers and relevant stakeholders in the state have contributed to the passage of the bill.

CCD revealed that with the passage of this bill, the Ekiti State Government has joined States like: Lagos, Anambra, Kano, Kwara, Kogi, Plateau, Ondo, Jigawa, and Bauchi States on the list of progressive and disability friendly State.
CCD stressed that “the signing of the Law has moved disability issues from charity-based approach to a right based approach.

“This gesture will reduce barriers faced by persons with disabilities in the state to operate on equal basis with others.
“We sincerely believe that the appointment of a person with disability as Senior Special Adviser on Disability Matters will help hasten the full implementation of the Law in the state having already established Office for Disability Affairs before now.

“We would like to assure Ekiti State government, persons with disabilities and other stakeholders of CCD’s willingness to provide technical support for the operationalization of the Law in the State to address the attitudinal, environmental and structural barriers that could impede the full implementation of the Law.

“CCD by this medium congratulates all persons with disabilities in Ekiti State for attaining this height in the struggle for an inclusive society in the State,” it added.