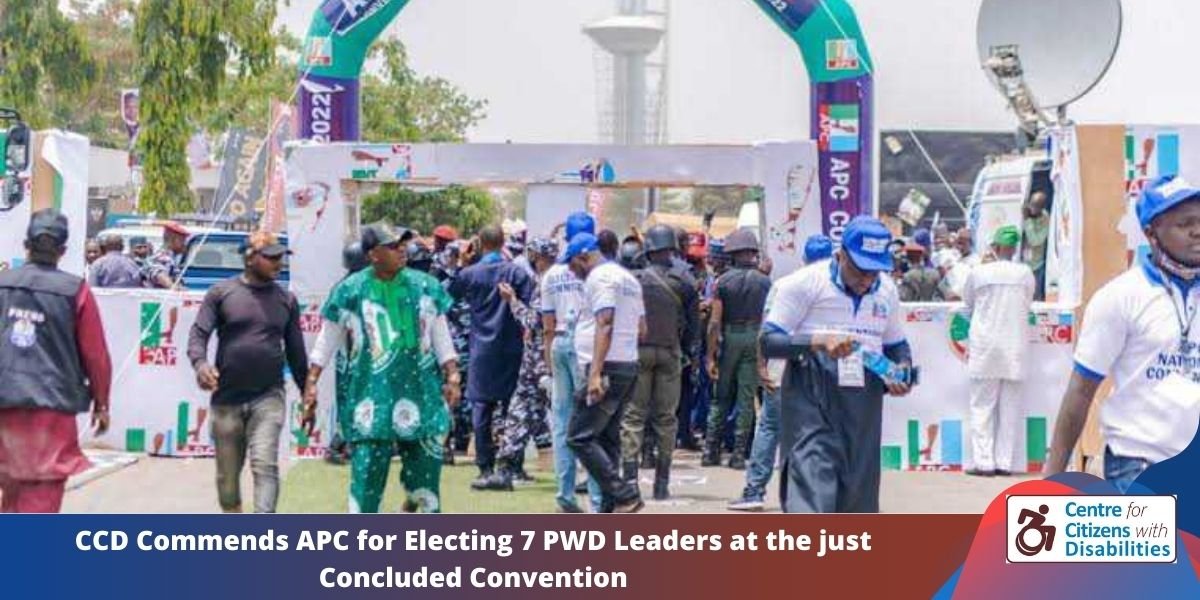 March 31, 2022 Written by CCD Nigeria. Posted in News No Comments

The Centre for Citizens with Disabilities (CCD) commends the All Progressive Congress (APC) for the election of Mr.Tolu Bankole (Ogun State) as Persons with Disabilities (PWDs) Leader and the six PWD Zonal leaders at the recently concluded APC National Convention. We congratulate the seven (7) PWDs elected to the National Working Committee of the APC party. By this singular act, APC has once again demonstrated that the inclusion of citizens with disabilities in the party hierarchy and affairs is profitable if we must experience inclusive good governance in Nigeria.

It is now imperative that other political parties emulate APC in the integration of vulnerable groups particularly persons with disabilities in political party activities. APC was able to achieve this because it is in their party constitution. Therefore, showing that the inclusion of PWDs in the party National Working Committee is not a charity, but a fundamental right of the party members. Regrettably, 15 out of the 18 political parties’ constitutions in Nigeria have no constitutional provision for the election of citizens with disabilities into the party hierarchy. This is worrisome.

We, therefore, call on the newly elected APC PWD leaders to take advantage of their positions to ensure that their party goes beyond electing PWDs party leaders to the appointment of PWDs as members of the Federal Executive Council and heads of Ministries, Departments, and Agencies (MDAs) of Governments at all levels in Nigeria. As it is today, line MDAs of the Federal Government in Nigeria led by APC are struggling to implement the National Disability Act. This needs to change.

Recognizing that Mr. James Lalu, the Executive Secretary (ES) of the National Commission for Persons with Disabilities (NCPWD) is the immediate past PWD leader of APC spent his time since his appointment as ES, NCPWD planning for the successful APC Convention as a member of the Caretaker Extraordinary Convention Planning Committee (CECPC). Now that the Convention is over, we are requesting the ES to focus on delivering the mandate of NCPWD to ensure the attainment of the purpose of the Commission. The main purpose of the NCPWD is to ensure the full integration of persons with disabilities into society, with the responsibilities for their education, healthcare, and the protection of their social, economic, and civic rights.

We would like to reassure the leadership of the NCPWD of CCD’s readiness to support the Commission in the achievement of its goals and mandate for the benefit of more than 31 million Nigerians with disabilities.