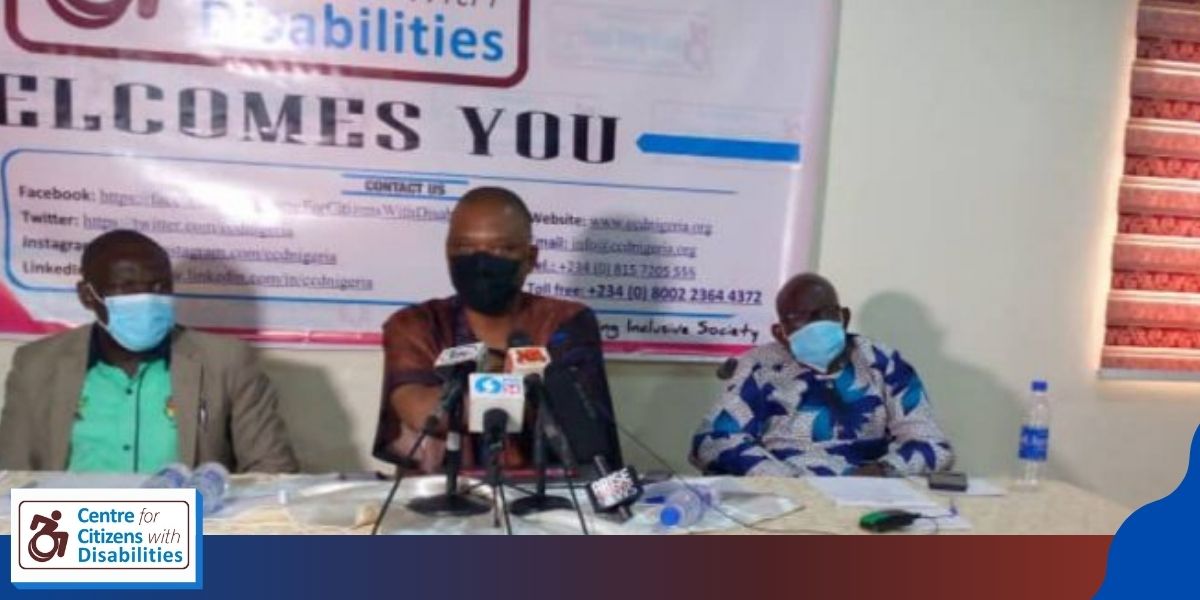 July 23, 2021 Written by CCD Nigeria. Posted in News No Comments

Centre for Citizens with Disabilities, CCD, has charged the Lagos State Independent Electoral Commission, LASIEC, to include over 2 million Lagosians with disabilities in it’s plans in the July 24 council polls.

Executive Director of CCD, Mr. David Anyaele, stated this, Thursday, at a public presentation of findings on the pre-election assessment of LASIEC provisions for PWDs for July 24, 2021, Local Government elections.

According to him: “We are worried that LASIEC has decided to exclude over 2 million PWDs in the July 24 council polls in Lagos.”

He added that despite series of petitions, “LASIEC has not complied with the provision of the law on the inclusiveness of PWDs in the exercise.

“Our expectations with reference to election and voting process during the Covid-19 in the state, access should be provided for PWDs in the process and ensure no one is left behind in participating in the electoral process.

“A similar opinion was shared during the Key Informant Interview with a representative from the Joint National Association of People With Disabilities, JONAPWD as thus: “We like to join our voice with CCD that is carrying out this assessment to urge LASIEC to do the needful for all the disability clusters by ensuring that they involve PWDs in the voter’s registration because we are not sure if there is a column that captures disaggregated data of PWDs.

“We are not sure if they are including PWDs as election observers or ad-hoc staff during the election.

“We expect that LASIEC will be able to do all of these to ensure that all stakeholders comply with the electoral Act while responding to the needs of PWDs during the election.

“Findings showed Majority of PWDs interviewed share limited knowledge about the ASIEC preparations for the forthcoming Local Councils elections because no deliberate effort has been made so far to include various disability clusters in LASIEC guidelines for the forthcoming election in Lagos.

“Findings showed that while there were some levels of engagement between the CSOs and LAISEC, regrettably, LASIEC failed to reach out or respond to the request from the organizations of persons with disabilities in Lagos State while preparing the electoral materials, voters’ education, recruitment of ad-hoc staff, and electoral observers among other electoral stakeholders’ engagements.

“Findings showed that LASIEC excluded PWDs and other vulnerable groups in their electoral guidelines for the forthcoming election because no reference was made to PWDs in the extant LASIEC electoral guideline. By implication, many PWDs will continue to struggle in accessing electoral materials and participating on equal basis with others.

“Findings revealed that majority of the PWDs interviewed who plan to vote in the July 2021 forthcoming election have serious concern for their security and public safety. Many of them are worried about electoral violence and the Delta Variant of COVID-19- pandemic.”

CCD recommended the followings: LASIEC as a matter of urgency should collaborate with Lagos State Office for Disabilities Affairs, LASODA, JONAPWDS and other relevant OPDs to include in
their electoral guideline the disability component in order to address the needs and concerns of persons with disabilities in the forthcoming July 2021 Local Government Election.

“LASIEC should include PWDs as ad-hoc staff, election observer and create a column for PWDs in their voters’ registration.

“LASIEC should ensure that all polling units are accessible for PWD on wheelchairs/crutches; provisions should be made for signage posters, sign language interpreters for the hearing and auditory impaired (deaf), and Braille ballot paper for the visually impaired (blind) as well as magnifying glasses for the albinos in order to ensure inclusive electoral participation for all PWDs in Lagos State.

“LASIEC should give voting priority to all persons with disabilities and another vulnerable group in the forthcoming elections. Bearing in mind that PWDs and in particular, a person with albinism may not be able to stay long under the scorching of the sun while on a queue to avoid another health challenge such as skin cancer,” among others.