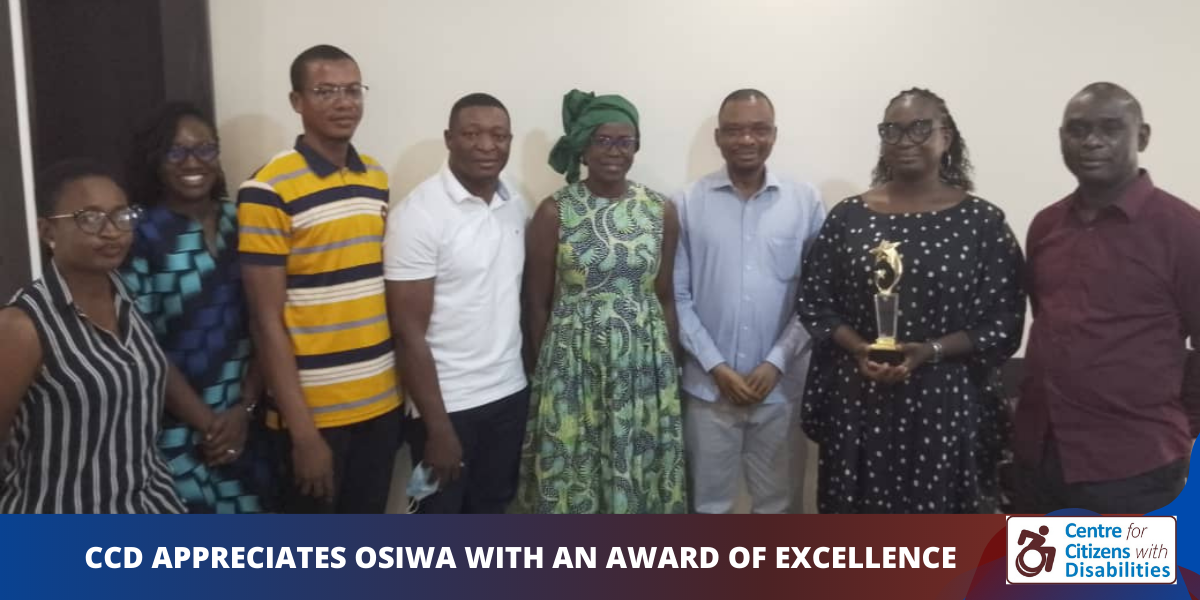 CCD Appeciates OSIWA with an Award of Excellence

February 17, 2022 Written by CCD Nigeria. Posted in News No Comments

The Centre for Citizens with Disabilities (CCD) led by its Executive Director; Mr. David Anyaele paid a courtesy visit to the office of the Open Society Initiative in West Africa (OSIWA) at Maitama Abuja on Wednesday 16th February 2022, to present to the organization in appreciation, an award of excellence for its commitment and support towards issues and course around the disability community.

The Executive Director of CCD, who was welcomed by the whole team at OSIWA, as he began by narrating the long history of struggle, lessons, and success since he collaborated with them in litigation advocacy against the asylum granted to former Liberia President Charles Taylor who engineered the cutting off of his two hands by rebels in Freetown Sierra Leone. He went further to also highlight how OSIWA contributed immensely using the Breaking Barriers Against Nigerians with Disabilities project which led to the passage of the National Disability Law and how the organization showed support through collaborating with CCD in this era of COVID-19.

Mr. David, was grateful to the past and present Executive Directors of OSIWA, who he said improved his skill on “Legislative Advocacy and Campaigns”.

After receiving the award, the Executive Director of OSIWA; Mr. Ibrahim Adara noted that the award is “transformational”. In his words, he said that; “We appreciate the testimonies, and the impressive news we are hearing because of our support and collaborations in the past years, and we are glad to hear that our support is yielding progress. Though we know we are doing great works in Nigeria, and this award is additional evidence”.

Mr. Adara also thanked the Executive Director of CCD and his colleagues from OSIWA who worked and supported the success stories and affirmed that CCD, will continue to enjoy continuous support from OSIWA.

The award event was attended by all staff of OSIWA and Mr. Humphrey Ukeaja and Ubong Daniel from CCD