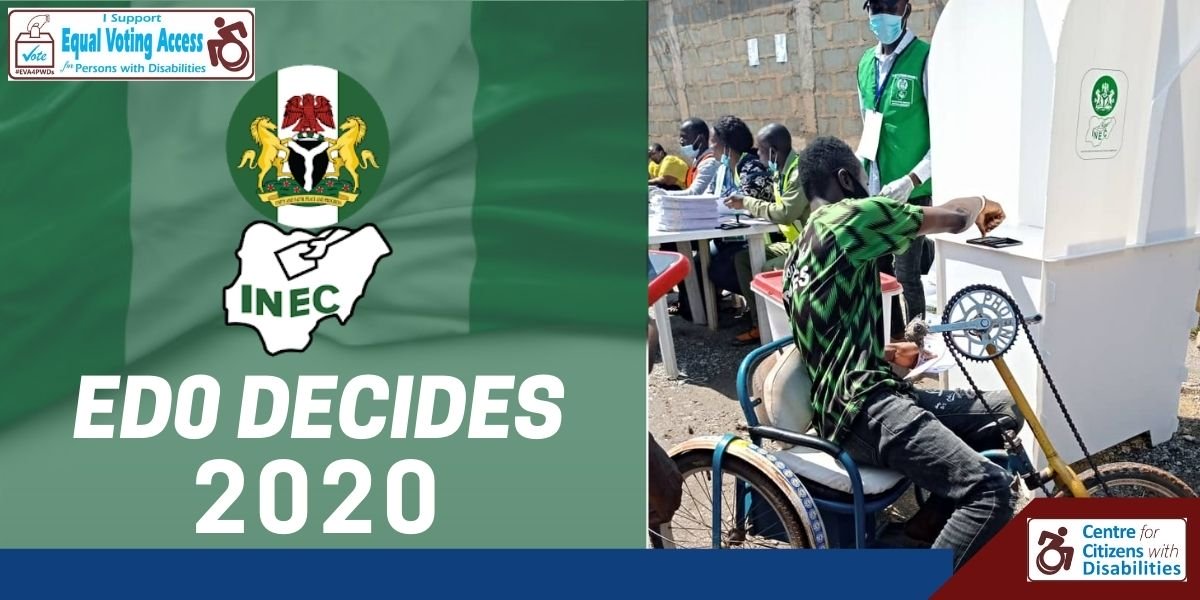 The Campaign for Equal Voting Access, a program of the Centre for Citizens with Disabilities (CCD) participated actively in the observation of the September 19, 2020 Edo State Governorship Election organized by the Independent National Electoral Commission (INEC)

EVAPWD commends the Independent National Electoral Commission (INEC) for the conduct of today’s election as we observed good turnout of voters as early as 8am.

EVAPWD is impressed to observe that marginalized populations – the aged, nursing mothers and pregnant women and persons with disabilities were offered priority voting in most of the polling units observed. We commend Polling Officials for their efforts in this regard. Regrettably, many voters with hearing impairments struggle without success to benefit from this provision.

EVA4PWDs observers observed that the promised Braille voter’s guide and Braille ballot paper by INEC for easy access of Election Day instructions, guidelines and ballot paper for Blind voters were scarcely available and where it was available, many INEC Ad-hoc Staff didn’t know it as they were calling their office, while some said they forgot it behind At Polling Unit 003, Car Park Ward 1, Oredo LGA, an observer assisted in locating the Braille material.

EVAPWD Observers did not see any magnified lens at the Polling Units, those that claimed to have one could not provide it for observers to see.

EVAPWDs also observed that Information, Education and Communication (IEC) materials such as Election Day instructions and guidelines to assist the deaf or persons with hearing impairment understanding of voting process were missing at majority of the polling units visited. This is a barrier to accessibility according to election day procedure for the deaf or hearing impaired voters.

Observance of INEC Covid-19 guideline were not adhered to in majority of the Polling Units visited in Oredo LGA. There were large crowd at Greater Tomorrow High School Oredo Ward 1, Rama Park at Ikpoba Okha, Oredo LGA among other Polling Units.

We urge INEC to address these issues as observed by EVAPWDs observers, especially as we move to Ondo State Governorship election next month.