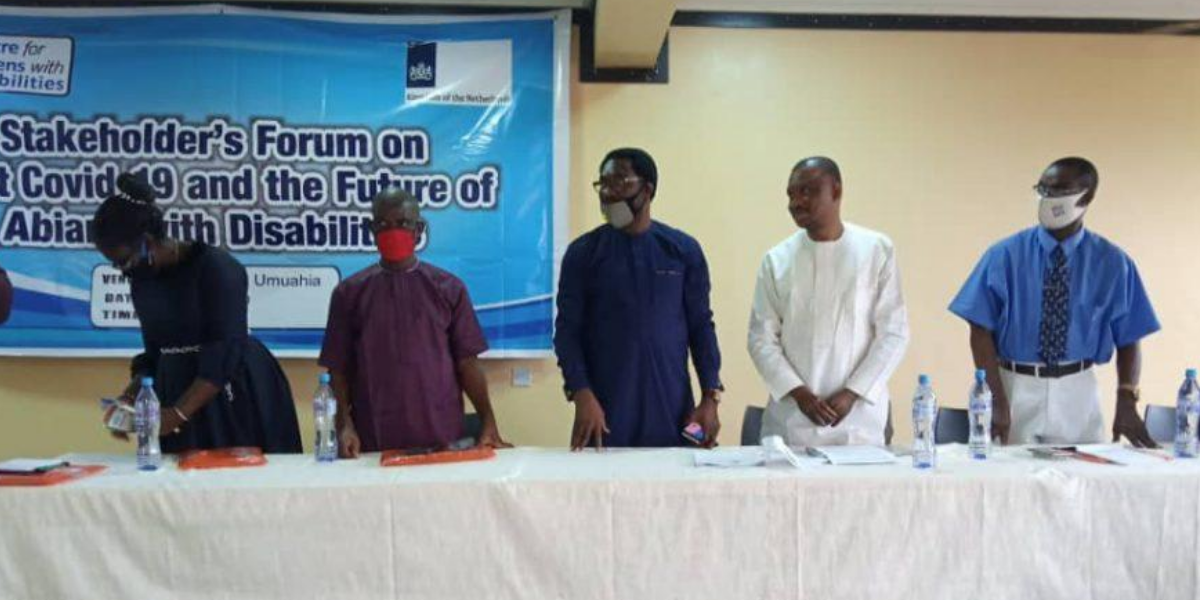 Call For Passage Of Disability Law Receive Nod From Stakeholders

Perturbed by the negligence of persons with disabilities in Abia State, stakeholders have called on the State House of Assembly to have a rethink on the Disability bill.

In their opinions during a stakeholders Forum on Post COVID-19 and the future of Abians with disabilities held in Umuahia, Stakeholders pondered on the fate of the disabled persons and asked pertinent questions on their welfare as well as repeatedly appealed passionately to the Abia State House of Assembly to pass into Law the Disability Bill.
Speaking at the forum, the Executive Director, Center for Citizens with Disabilities (CCD), Mr. David Anyaele decried the state of the disabled in Abia State, saying that their situation is not at par with others across the Federation.

Anyaele lamented that the disabled community in Abia are treated badly as against the massive encouragements and support their counterparts receive in other States.

He alleged that the exclusion meted out to persons with disabilities in Abia State are obvious, as they do not have access to public places, healthcare buildings, places of worship, adding that offices of public office holders in the state are constructed without recourse to the existence of persons with disabilities.
Anyaele who called on the Abia State government to as a matter of urgency, pass the Disability Bill into Law, noted that if passed into Law, persons living with disabilities will be properly included in the scheme of things in the State.

He said the objective of the meeting, was to brainstorm with key Ministries, Departments, and Agencies in the state and identify areas of collaboration, highlight their roles to the disabled community as well as chart ways of carrying the disabled community along in the post-COVID-19 plans as they have been relegated to the background for too long.
Baring his mind, the Chairman Joint National Association of Persons with Disabilities (JONAPWD), Comrade Stanley Onyebuchi, commended David Anyaele, for giving them a voice in the state and called on Abia State government to consider their plights by passing into Law the Disability Bill as they are backward compared to other states of the federation.

Other respondents, including the Chairman National Association of the Blind (NAB), Mr. Wisdom Okechukwu, revealed that they have a lot of challenges and problems begging for attention, stressing that training of visually impaired persons which was done in Lagos has not been regular just as he stated that those rehabilitated years back have been abandoned without employment.

On her part, Coordinator Albino Foundation, Mrs. Ugonma Okeke, decried the negligence Albinos suffered in the area of employment and empowerment, insisting that they have vibrant and ebullient people who can occupy any position in the state and perform optimally.

Her views were not different from that of the Chairman, Abia Chapter of National Association of the Deaf (NAD), Mr El-Dad, who narrated the difficulty experienced in acquiring education in the state, informing that there is no Secondary school for the deaf in the state.

He decried the dearth of Primary Schools for the deaf as there exist only three in the state and called on the state government to construct more schools including secondary schools to ease the sufferings of going to other states in search of qualitative education.

Responding on behalf of the Abia State Government, the Commissioner for Youth and Sports Development, Chief Emeka Ikwuagwu commended the CCD Executive Director for an opportunity to interface with the disabled Community.

He pointed out that the Abia State government is trying its best to carry the disabled persons along in its programmes, adding that in the Ministry of Youth and Sports has always engaged persons with disabilities.

There were also representatives of the Secretary to the Abia State government, Commissioner for Health, Works, Women Affairs, Ministry of Justice, Education who also pledged the commitments of their Ministries to the plights of persons with disabilities.