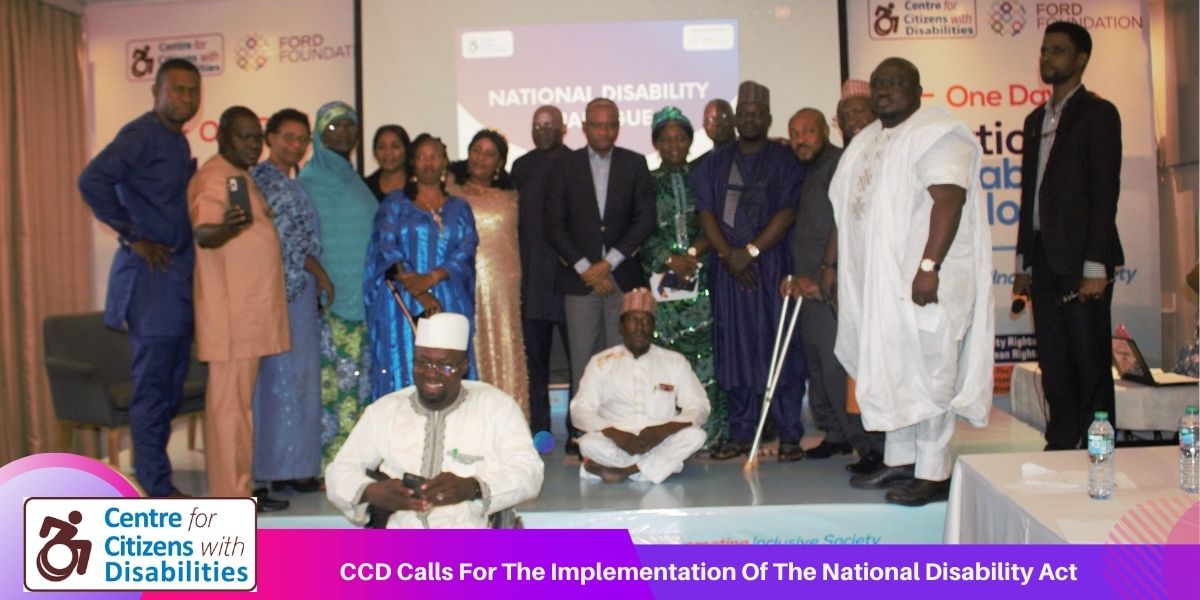 CCD calls for Implementation of the National Disability Act

July 30, 2022 Written by CCD Nigeria. Posted in News No Comments

The Centre for Citizens with Disabilities (CCD) has called on all state and non state actors to comply with the provision of the Discrimination Against Person with Disability Prohibition Act which was passed into law by the president, Mohammed Buhari in 2019.

The ‘One Day National Disability Dialogue’ organised by CCD with the support of Ford Foundation, has in attendance commissioners from across the state, representative from the Federal Ministry of Justice, the executive and governing board of the National Commission for Persons with Disabilities, the General Manager Lagos State Office for Disability Affairs, Joint National Association of Persons with Disabilities from the six geopolitical zones, funding partners and other CSOs.

Mr. David Anyaele, the executive director of CCD speaking at the National Disability Dialogue lamented over the low level of compliance and implementation of the provision of the Disability law.

“It is not about passing the law but also implementing. This will generate job opportunities, it will liberate families, promote equal opportunity and social inclusion and all of us will be happy as Nigerians”

According to Mr. Theophilus Odaudu, the program officer of Disability Rights Fund (DRF), the National Disability Dialogue is an avenue to call the government into action.

He also commend the efforts of CCD for its relentless efforts since the inception of the law towards ensuring we get the law implemented.

“The only way persons with disabilities can benefit is when the law is implemented. Implementation of the law will pull many benefits into the Disability Community and Nigeria as a country”.

He further encourages all Organisation of Persons with Disabilities to continue to push and call the government that has passed the law to take necessary steps in the implementation.

In his research findings also, the level of compliance and implementation of the provision of the law is also very low.

“There is general need for more advocacy and understanding of the law. The advocacy should extend to reach the rural areas and the law should be broken down into local dialects and languages for proper digestion by persons with Disabilities”

“The National Commission for Persons with Disabilities should share its agenda, mission and vision with its primary constituency (PWDs) so that they can be aware of the activities of the national commission, he concluded.

While interrogating the report findings, Professor Badaiki felt unsatisfied with the level of awareness creation by the Federal Ministry of information.

“Though the ministry of information is responsible for dissemination of information, it’s function is supposed to be accumulative in addition to the role of the National Commission for Persons with Disabilities to ensure that people are aware of the existence of the law”.

He also called for the enforcement of the law

“Members of the public should be able to institute some actions to enforce the right of persons with Disabilities as enriched in the law”. He said.