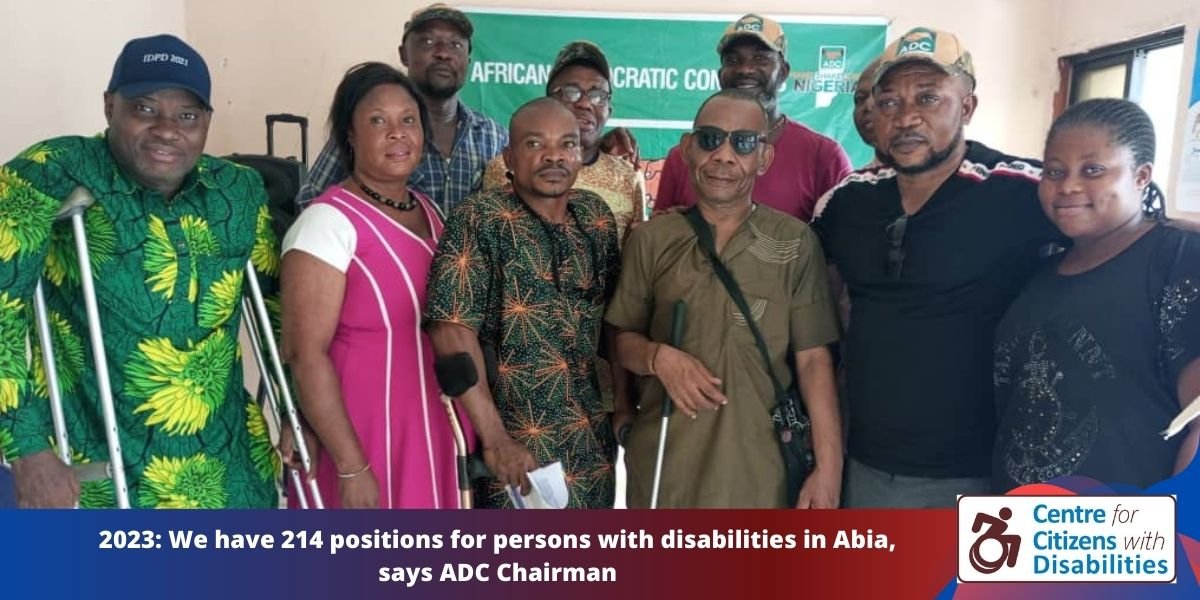 2023 We have 214 positions for persons with disabilities in Abia, says ADC Chairman

April 6, 2022 Written by CCD Nigeria. Posted in News No Comments

The Chairman, African Democratic Congress (ADC), in Abia, Don Norman says the party has allotted 214 positions to persons with disabilities (PWD), for the 2023 elections in the state.

Obinna made this known on Tuesday during an advocacy visit by the Centre for Citizens with Disabilities (CCD) at the party secretariat in Umuahia.

He said that the party had reserved positions for them in the state executive, local government executive and in the 184 political wards in the state.

According to him, “it is part of our constitution that we must carry PWDs along, and we will have as many of them as possible as we grow.”

The chairman urged them to give the party massive support as well as get their party membership cards, adding that membership registration is free.

“It is sad that you have a society that discriminates against persons with disabilities. We are actually trying to cancel that disparity, close that gap,” he said.

Also, the state chapter of All Progressives Congress (APC) has assured the group of inclusiveness in its activities for 2023 elections.

APC State Admin Secretary, Dr Emeka Chilaka, who received the CCD team at the party secretariat at Azikiwe Street, Umuahia, said the party under President Muhammadu Buhari had something good for PWDs.

Chilaka said that Buhari’s approval of national disability act in 2021, showed the great importance APC attached to the group.

Earlier, the Executive Director of CCD, Mr David Anyaele, who was represented by Mr Samuel Ekeoma, said the group came to interface with the parties as regards their programmes for PWDs towards 2023 elections.

The group in a four-point written request, urged the parties to take appropriate measures to remove all forms of barriers that hinder PWDs from participating in party activities.

These issues, according to the group, include discrimination against PWDs, denial of access to meeting venues among others.

CCD also requested the parties to review their constitutions to provide elective positions for PWDs in their executive committees.

The group urged the parties to remove barriers of accessibility to venues, lack of sign language interpreters and materials in Braille for the blind party members.