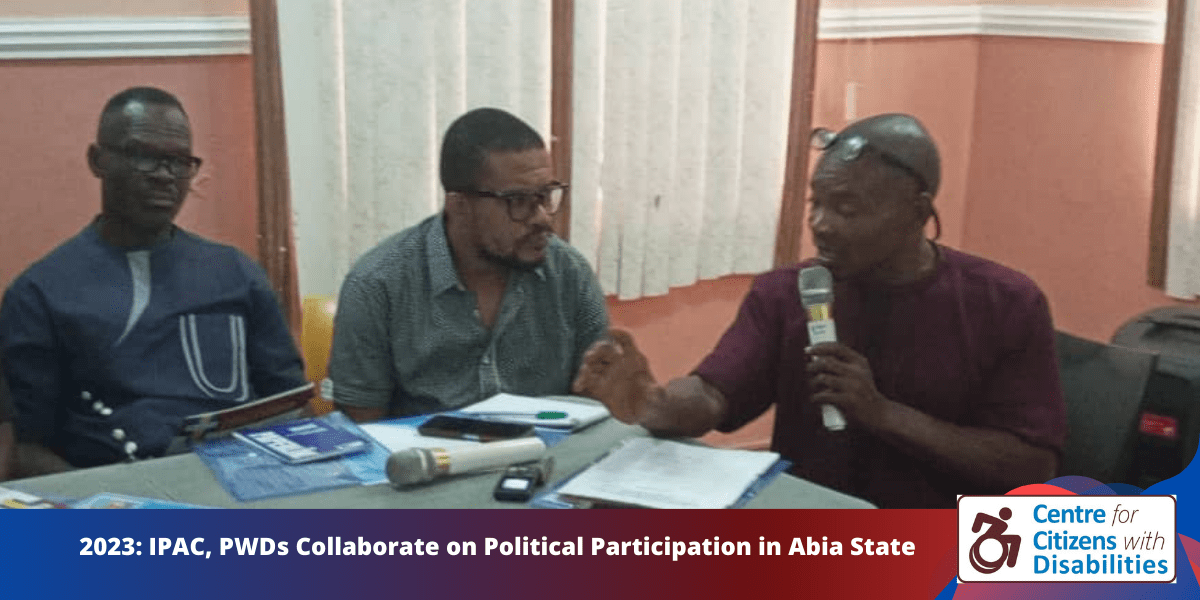 April 23, 2022 Written by CCD Nigeria. Posted in News No Comments

The Inter-Party Advisory Council (IPAC) in Abia says it will collaborate with Persons With Disabilities (PWDs) to ensure they have equal access and participation in the political process in the state.

The IPAC Chairman, Mr Ceekay Igara, said this on Thursday in Umuahia, during an interactive forum between the council and PWDs’ community in the state.

The forum was organised by the Centre for Citizens with Disabilities (CCD), a non-governmental organisation that seeks to protect the interest of PWDs.

The forum was meant to engage the leadership of IPAC to support the implementation of PWDs’ participation in political parties’ administration and activities in the state. Igara urged PWDs to articulate what they considered to be their inhibitions so that the council would in turn present them to political parties and make sure they were all achieved.

He said: “In capacity, you are not short-changed. What is important is that you are coming out to participate.

“Almost all political parties have robust positions for PWDs, but it is important that you take decisions by yourselves and make sure that you participate fully.

“You should forget about these stipends that emergency philanthropists give to you and make your decisions to be part of the process.

”Also, the Deputy Chairman, Mr Tony Ojih, said that it was most necessary that the healthy among the PWDs should indicate their political interest through the political parties.

The IPAC Secretary, Mr Uzodinma Nwoko, urged PWDs to participate actively in the political process, starting from the ward level.

According to Nwoko, who doubles as the state Chairman of Young Progressives Party (YPP), as an individual, you need to first of all have a political will, then contest election in a political party.

Earlier, the Abia PWD Chairman, Mr Iroabuchi Alozie, urged IPAC to advise political parties to have quota for their members in the South-East.

This, according to him, will help to ensure that PWDs are actively involved in party administration and activities.

He pointed out that most of them were highly placed individuals but could not do much because they were being relegated to the background.

Anyaele, who was represented by Mr Samuel Ekeoma, urged IPAC to encourage political parties to put into practice the provisions made for PWDs in their party constitutions.

He frowned at the Abia State Government’s delay in the passage of disability bill needed to create an enabling environment for PWDs to be actively involved in political activities in the state.